Home » Hip Hop News » Kawhi Leonard’s jersey is already being burned by fans of the Spurs and he hasn’t left the team yet, but fans have theories of him intentionally missing the playoffs to force trade to Lakers (FULL VIDEO INCLUDED) #Spurs [VIDEO] 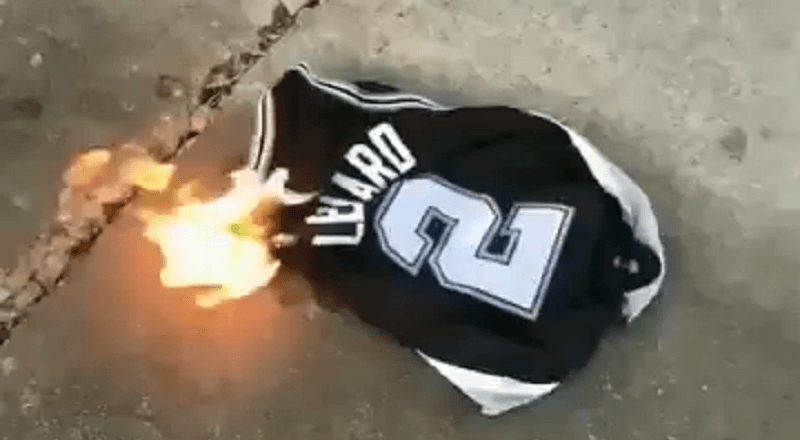 Again, people is it really that serious? Yesterday afternoon saw a lot of talk about Kawhi Leonard. Honestly, he disappointed a lot of people, because he was being groomed to be the San Antonio Spurs’ franchise player, as the Tim Duncan/Tony Parker/Manu Ginobili unit dwindled.

Kawhi Leonard did well in the 2017 campaign, leading San Antonio to a 61-21 record and a trip to the Western Conference Finals. Game 1 saw them owning the Warriors, until Zaza Pachulia collided with him. Since then, Kawhi hasn’t played a game.

Yesterday saw reports that Kawhi Leonard wanted to be traded and a plethora of teams lined up. No surprise, the Celtics are looking to work a trade, centered on Jaylen Brown, one of their breakout stars from the 2018 playoffs. Meanwhile, in San Antonio, fans are already beginning to burn Kawhi Leonard’s jersey.