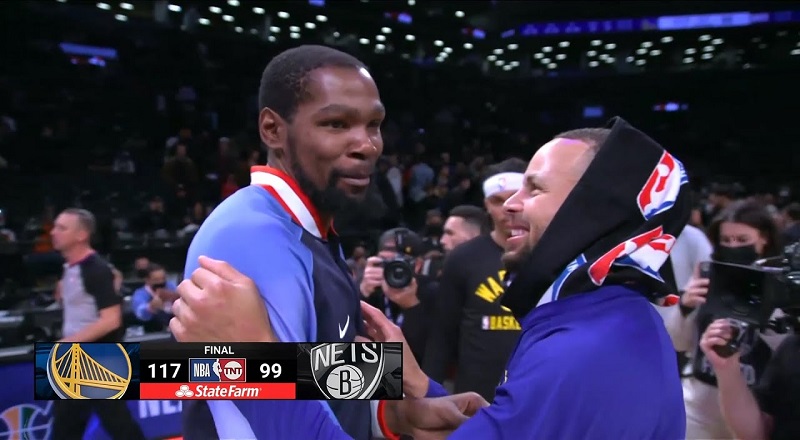 Kevin Durant roasted on Twitter as Warriors won title without him

Kevin Durant joined a Golden State Warriors team that was fresh off a 73 win season. The 2016 Warriors should have won the championship. Instead, they blew a 3-1 lead to Cleveland, losing the title. As a result, Kevin Durant was signed to confirm at least the 2017 title.

Kevin Durant took the lead, as the Warriors won the 2017 and 2018 title. By 2019, Kevin Durant was visibly frustrated with the Golden State Warriors. An in game argument with Draymond Green is what most blamed on Kevin Durant leaving.

Kevin Durant got injured in the 2019 NBA Finals, as did Klay Thompson. As a result, the Toronto Raptors won the championship. While Kevin Durant joined Kyrie Irving and the Brooklyn Nets, they would not begin playing together until the following year. In 2021, Kevin Durant had Kyrie Irving and James Harden, but still lost in the playoffs to the Milwaukee Bucks. Meanwhile, the Warriors had 2020’s worst record, and lost in 2021 to Memphis, in the play-in.

Kevin Durant’s Nets were favorites to win the 2022 championship. Instead, the Nets imploded, and James Harden was traded to the Philadelphia 76ers for Ben Simmons. As a result, Kevin Durant and Kyrie Irving’s Brooklyn Nets were swept by the Boston Celtics. The Warriors, meanwhile, returned to championship form. Andrew Wiggins took on Kevin Durant’s role. In the playoffs, Golden State eliminated Denver, Memphis, and Dallas. Tonight, they won the title over Boston, and Twitter is clowning KD.

Kevin Durant roasted on Twitter as Warriors won title without him