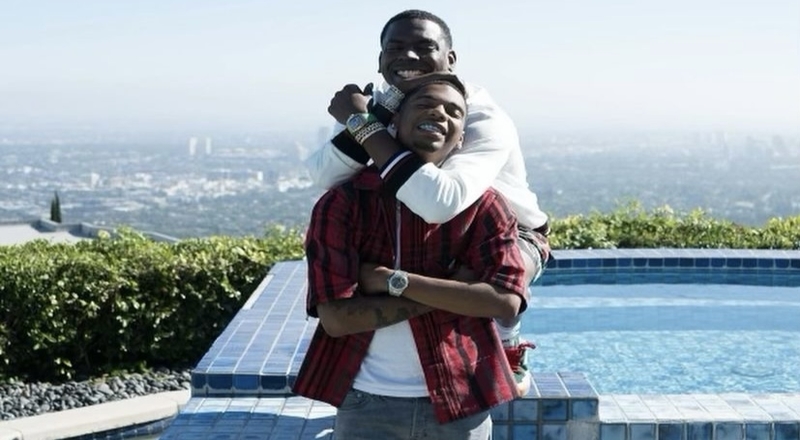 It’s been almost a week now, since Young Dolph was shot and killed, in his hometown of Memphis. Dolph was last seen purchasing cookies, at Makeda’s Homemade Butter Cookies. Two men opened fire on Dolph, as he was pronounced dead on the scene. His killers are currently still at-large.

The tributes to Dolph continue to pour in, as his Paper Route Empire artist, Key Glock, is finally letting his emotions flow. On Sunday, in his Instagram stories, he told people to stop asking if he’s okay, knowing that he isn’t. This was understandable, considering how much of a loss this was, for someone close to Dolph, like Glock was.

Now, Glock is expressing how much Dolph means to him, in a lengthy post, to his feed, which also contained some of Glock’s favorite photos, of the two together.

“Damn bro, im LOST😞 my heart is torn my brain bout to explode it HURTS when I breathe..why you leave me so soon?? I’ll never be the same, you was my lefthand man,my brother,my cousin,my mentor and drank partner🥲 for the past 2 years I been taking LOSS AFTER LOSS and still can’t understand why💔First, it was my pops then my auntie then my grandma and now YOU!! I know we can’t question GOD but GOD why?! There’s nothing no one can do or say to bring you back and that shit just eats me up by the second!! Nigga you was Phil Jackson and I was yo MJ😤 Remember I told you I got yo back no matter what?? I GUARANTEE THAT!! Words really can’t explain how I truly feel right now.. I’m sick to my stomach bruh!! Peace ain’t even working.. all I see is DARKNESS, only GOD knows how much you meant to me💛 #LongLiveDOLPH🐬#PlugBestfriend🔌 #Dum&Dummer🤪 #THEMniggas😎 #FamilyNOTfriends👎🏾 #PaperRoute4Life💰”

Dolph and Glock have made songs together for almost a decade now, as the two also released their collab mixtape, “Dum and Dummer 2,” this past March. In early 2020, the two also ventured on their “Dum & Dummer Tour,” when the first Dum and Dummer mixtape, was released. In 2018, the two had their biggest collab hit together, with Dolph’s “Major” single, which appeared, on the “Role Model” album.

Check out Key Glock’s powerful tribute to his fallen friend, Young Dolph, below.

More in Hip Hop News
Blac Youngsta arrest video is from March and has nothing to do with Young Dolph
Toosii Delivers Ecstatic Performance, in His “Thank You For Believing Tour” Concert, in Atlanta [VIDEO]