Home » Hip Hop News » Keyshia Cole and O.T. Genasis officially ended their beef, over “Love,” during her #Verzuz battle, with Ashanti, as she brought him out to crash the song playing 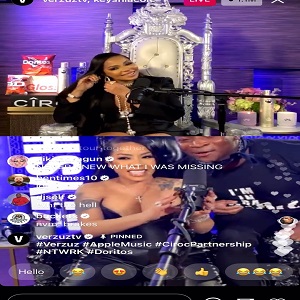 So far, Verzuz has provided an interesting platform, making for good discussions. Many people have questioned who should battle who. Early on, it was floated that 50 Cent should battle Ja Rule, effectively ending their beef.

Ultimately, 50 Cent refused to battle Ja Rule, but Jeezy convinced Gucci Mane to battle him. Despite the tension, those guys ended their battle with peace. While there was no beef with Ashanti and Keyshia Cole, a beef ended.

Some may remember, last year, O.T. Genasis sampled the classic Keyshia Cole record, “Love.” It was unclear whether that song was a joke, or not, but Keyshia Cole wasn’t laughing. The two had some words and did not make amends, but Keyshia Cole brought O.T. out when she performed “Love,” on Verzuz, and he inserted some humor, officially ending their beef.

More in Hip Hop News
Keyshia Cole’s boobs have dominated Twitter, during her #Verzuz battle, with Ashanti, all night, as fans have joked about wanting to see her titties pop out, and others comment on how good they look
Yaya Mayweather Shows Off Her Father, Floyd, Holding Her Newborn Son That She Had With NBA Youngboy