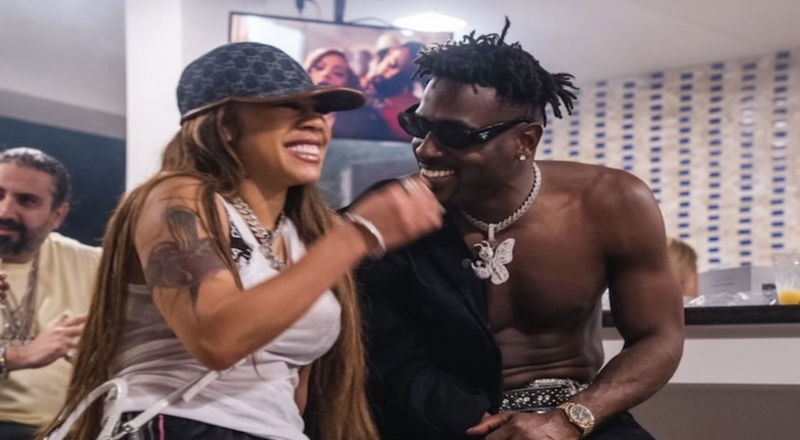 Last month, former NFL star Wide Receiver, Antonio Brown, released another hip-hop album. This was “Paradigm,” as this was stacked with plenty of collaborations with big stars. This included DaBaby, Young Thug, Keyshia Cole, 42 Dugg, French Montana, and more. It was led by AB’s “Pit Not The Palace” single.

The next single from Antonio Brown’s Paradigm album, was “Don’t Leave,” featuring Keyshia Cole. The video was also released for this collab, as AB and Keyshia also spoke multiple times, on Instagram Live. Keyshia even said that AB could win Grammys, for his music.

Keyshia appeared to hint that she and AB have just been friends, but it may be more than that, now. In several new Instagram stories, the R&B star said in both of them, that she misses AB a lot. The two photos that she posted, were of her and AB hanging out together.

Antonio Brown has been trending a lot, since getting cut from the Tampa Bay Buccaneers, in January. That came after he left in the middle of a game vs the New York Jets, as he ended up claiming that he was allegedly forced to play on an injured ankle. AB ended up linking up with Kanye West, and soon became the President of Ye’s Donda Sports brand.

More in Hip Hop News
Sales increase for LaRopa hoodies, after Gunna was spotted wearing one, in latest mugshot
Cardi B reportedly had DJ Will beaten up for playing Nicki Minaj’s music while she was in the club [VIDEO]