Home » Hip Hop News » Kim Kardashian “SQUAD” IG pics get dragged by Black Twitter, including one with Naomi Campbell, where Kim looks just as dark, if not darker, than Naomi, and that they’re all sitting from lightest to darkest complexion + Dr. Dre’s wife’s race sparks discussion, as people think she’s white 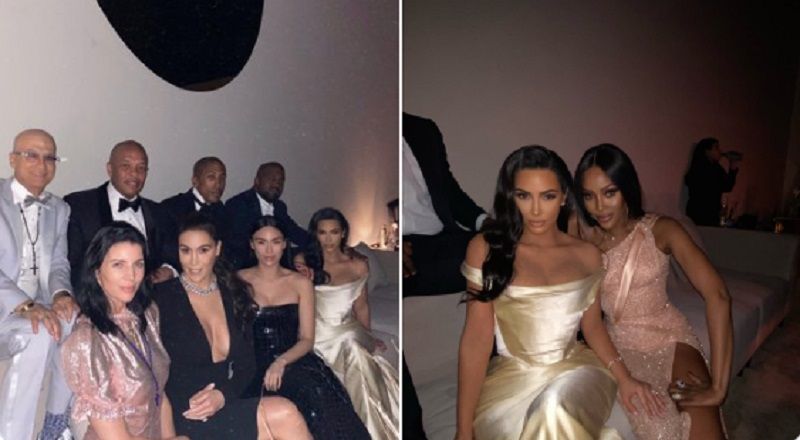 Over the past six years, Kim Kardashian and Kanye West have become social media’s favorite couple to drag. Much of this is due to Kanye West being so eccentric. Most fans believe Kanye West views Kim as the Beyonce to his Jay-Z.

Meanwhile, Kim Kardashian gets a bad rap for wanting to be a part of the elite celebrity circle. Many fans have taken delight in the alleged slights Jay-Z and Beyonce have given her. These moments were mostly blown out of proportion and taken out of context.

Still, Kim Kardashian was happy to be at Diddy’s 50th birthday party, and she’s still sharing pics. The fans saw her “SQUAD” pics and began to drag her again. In the photos with the hip hop power men and their wives, fans pointed out how they were seated from lightest to darkest, and in the pic with Naomi Campbell, they pointed out how Kim was almost as dark as Naomi, before going in on Dr. Dre’s wife, and her race.

Read the tweets about Kim Kardashian below:

More in Hip Hop News
Penn Square Mall in Oklahoma has an active shooter, is on lockdown, and people there take to Twitter to inform @GovStitt and to warn shoppers not to come!
Ar’mon, from Ar’mon and Trey, fought his best friend, Josh, over a flirting prank with his girlfriend, Essie, and Twitter and YouTube say he’s overreacting and took it way too far, but he and Josh both responded on IG Story, and are back on good terms [PHOTOS]