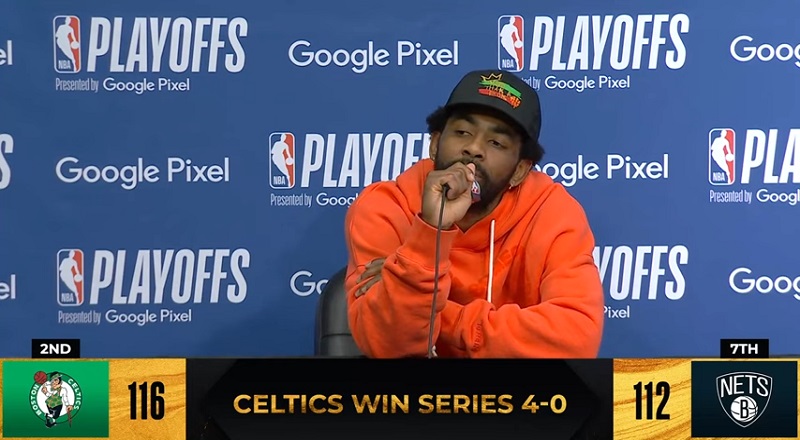 Kyrie Irving dragged for postgame interview after Nets got swept

Kyrie Irving was originally one of the most hyped NBA prospects. In 2011, Kyrie Irving was drafted by the Cleveland Cavaliers. However, Kyrie Irving didn’t make the playoffs until LeBron James returned to the team. Kyrie Irving playing alongside LeBron led to him playing in three straight NBA Finals.

Kyrie Irving’s stock was at an all-time high, when he hit the game winning shot in Game 7 of the 2016 Finals. When Kyrie Irving officially beat the historic Warriors, a debate began about the Cavs. As a result, people questioned whether the team was Kyrie’s or LeBron’s. Basically, Kyrie Irving wanted his own team, so he forced a trade to Boston.

Kyrie Irving played alongside a rookie Jayson Tatum and young Jaylen Brown. However, Kyrie Irving being injured led to Jayson Tatum and Jaylen Brown stepping up. With the Celtics playing better without Kyrie, he left for the Nets. For three years, Kyrie Irving has had fans waiting for the Brooklyn Nets to arrive. Kyrie refused to get the vaccine, which sank the Nets’ season, and cost them James Harden. In the Game 4 post game conference, Kyrie touched on this. On Twitter, Kyrie Irving is catching major heat, as he is blamed for the Nets’ disappointing season.

Kyrie Irving dragged for postgame interview after Nets got swept

More in Hip Hop News
Kelly Rowland reveals her Uber driver had stinking breath and she could smell it with her mask on
Jamie Foxx defends Ben Simmons from Stephen A. Smith’s insults, accusing Stephen A of only going after basketball players