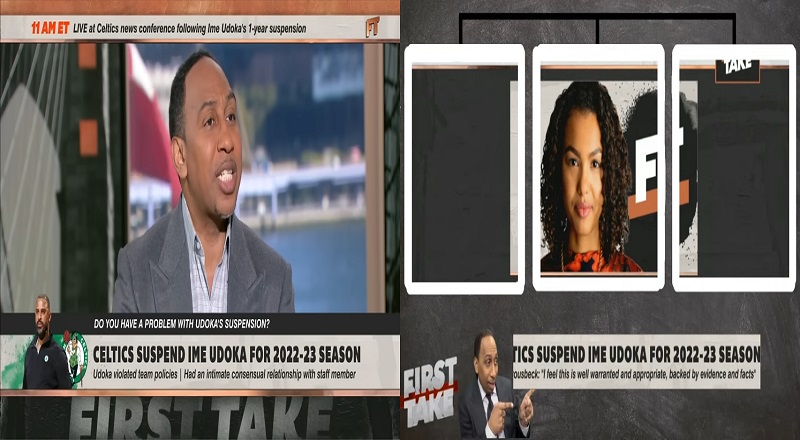 Malika Andrews argues with Stephen A Smith over Ime Udoka

Malika Andrews, in two years, has become one of ESPN’s most popular figures. When she was named as the host of “NBA Today,” Andrews had the support of millions. As many remember, ESPN was under fire, after their previous NBA reporter made controversial racial comments. After that, Malika Andrews was hired as her replacement, and “NBA Today” launched in 2021.

Malika Andrews rose to popularity and she is often the source of rumors. Because of her age, Andrews quickly became a fan favorite. Aside from that, Malika is also a very attractive woman. As a result, Andrews is almost always trending on social media. Yesterday, Malika Andrews trended on Twitter, due to the whole Ime Udoka fiasco that has torn the Boston Celtics apart. Udoka was exposed, earlier this week, for having an affair with a member of the Celtics’ organization.

Malika Andrews has become popular on ESPN, but she is also dealing with a subset of backlash. There are a disturbing number of videos on YouTube that pick up on Malika’s moments. All of the videos take things out of context. However, when Malika Andrews called into “First Take,” almost all of social media agreed that she was out of line. Stephen A. Smith is the undeniable star of ESPN and his opinions generate millions of views. As a result, Stephen A. offered his take on Ime Udoka, saying the Celtics should have fired him, or let him keep coaching. In response, Malika tried to check Stephen A. and inadvertently took his words out of context. As a result, Stephen A. set the record straight, and Twitter is coming for Malika.

Malika Andrews argues with Stephen A Smith over Ime Udoka