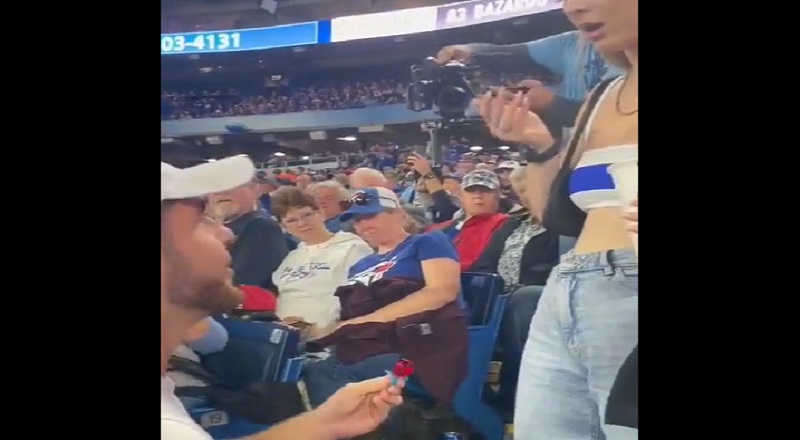 When the Boston Red Sox took on the Toronto Blue Jays, one man decided to create a life changing memory. It is unclear how long he was dating his girlfriend. Whatever the case, he decided to propose to her. The only problem is that the ring he presented her with was a ring pop. As a result, the woman hit him in his face.

MLB baseball games have always been a breeding ground for viral moments. Typically, people get caught in romantic moments during these games. With that being said, people are often on the “kiss cams.” Aside from that, men often take their girlfriends to these games to propose to them. None of these people did what this man did.

After this man proposed to his girlfriend, he made tears come to her eyes. Being proposed to in a stadium full of people is a very kind and romantic gesture. However, once the woman saw the ring that was in the box was a ring pop, romantic feelings gave way to anger and disgust. As a result, the woman took physical action against her man. She ended up slapping him across the face. First, he had her in a stadium full of people. Second, he put all of the attention on her. That said, the woman did what anyone would in that position.

So much better than a real ballpark proposal pic.twitter.com/OzuNqi5nui

More in Hip Hop News
Azealia Banks calls out female rappers, for beefing with Cardi B, so they could support Nicki Minaj [VIDEO]
Akon says he loves African women because they are more submissive than American women and they know women can never be equal to men [VIDEO]