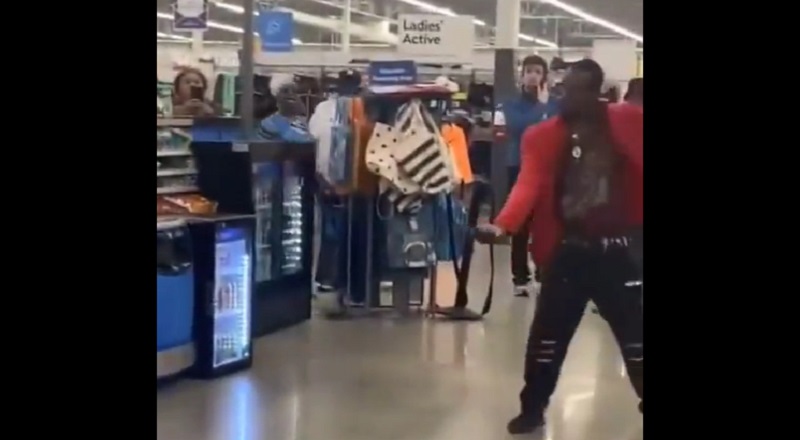 Man wielding a knife in Walmart gets knocked out by customer

It seems like there is some kind of drama in Walmart going viral, every week. Because of this, the company CEO is threatening to close stores. With other big box stores going through shutdowns, Walmart has continued to be successful. However, there have been all kinds of things going on in the various Walmart locations. This afternoon, a video began going viral of a man who was making a scene, holding a knife in a Walmart store.

Truthfully speaking, a lot of what is going on are signs of mental illness. Many people are acting out and people are recording them, instead of asking for help. Then, the people wind up blaming the media for reporting what’s going on. However, a situation such as this is something worth reporting. After all, despite the mental stability of the man, this situation was domestic terrorism. Fortunately, there was a person there who took action.

As customers were checking out of an unnamed Walmart, there was a man holding a knife. The man was wearing red and causing a scene. Not only was the man holding a weapon, but he was also very loud, as people walked by. The scene was obviously one that caused concern. People there were terrified. However, as the man was acting out, one heroic person came up with a plan. One guy, wearing a hoodie, came behind the man holding the knife and hit him, knocking the knife out of his hand.

Man wielding a knife in Walmart gets knocked out by customer