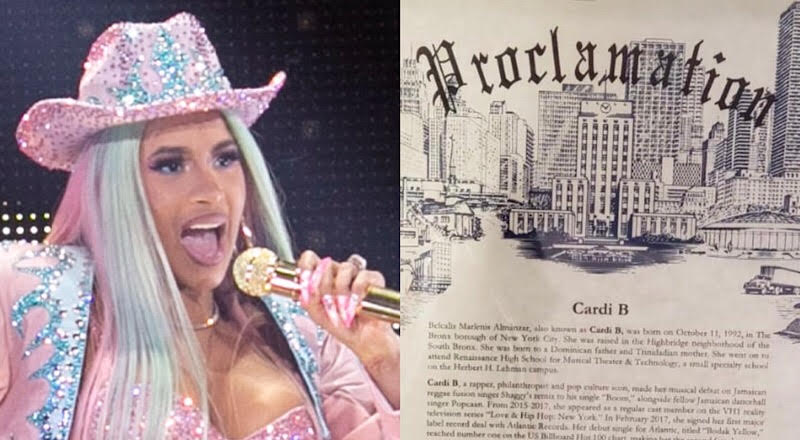 Okkkuurrrrrrrr!!!! A rodeo concert like no other! March 1st has officially been dubbed “Cardi B Day” In Houston after her record breaking RodeoHouston show. Cardi B is the latest celebrity to hit H-Town and receive a gift of recognition, following Meek Mill’s proclamation last week and Travis Scott a couple of weeks prior. The Bronx femcee fresh off of her visual release of “Please Me” with Bruno Mars, performed at the Houston Livestock Show and Rodeo on Friday night and set a brand new attendance record for the concert.

The all-time paid attendance record was shattered by Cardi as her show was made up of 75,580 people for Black Heritage Night after it sold out in 40 minutes. The last artists to hold the record were Garth Brooks and Selena Quintanilla! Aside from listing her career accolades, the proclamation highlights Cardi’s recognition of the city of Houston and “unequivocally expressed her support by mobilizing into action to host the Hurricane Harvey Relief Drive on September 16, 2017.” To even make it more special, Houston is where her and hubby, Offset had their first date.

Cardi rocked the stage with a tight, cohesive, and fun filled set in a pink and blue cowgirl fantasy outfit with a cowboy hat and hair to match that cascaded past her waist. Performing some of her hits off of her debut album, Invasion Of Privacy, such as “Money Bag,”  “Drip,”and “Bickenhead.” She then performed “She Bad” and dedicated it to “all my pretty girls — and the ugly ones, too,” before wrapping up her set and slowing things down a bit with “Ring.” What a way to bring in the weekend! Congratulations Cardi B!

Okurrrrrtttt! March 1st Is Now Officially Cardi B Day In Houston, Texas After She Broke The Record For Most Attendance At Her Show. 75,500 People Were In Attendance And We Hear The Last Person To Hold The Record Was Selena Quintanilla. @iamcardib #cardib #invasionofprivacy #bardi pic.twitter.com/x3iI6Zuk6g

Cardi B receiving a Proclamation backstage at the 2019 Rodeo Houston: March 1 is Cardi B Day!!

Continue Reading
You may also like...
Related Topics:cardi b, cardi b day, houston, selena