Home » Hip Hop News » Mariah Carey’s Twitter got hacked and the hacker has Mariah Carey going in on Eminem, his manhood size, and offers MC to him; Hacker says Connor Miller is the reason for this, as Twitter is in shock 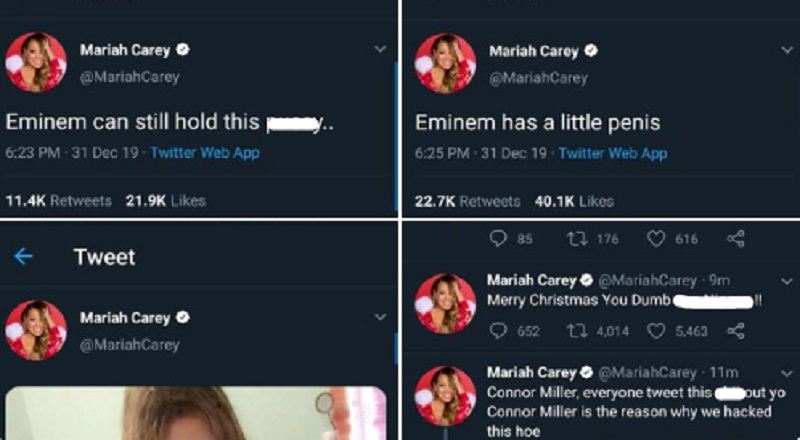 It’s the end of 2019, with only a few hours left in the year. On Twitter, the top trending topic is Mariah Carey, whose Twitter was hacked. At the end of the year, and beginning of the New Year, Mariah is normally the leading trending topic, due to her usually performing.

When Mariah Carey began trending, tonight, most assumed it had to do with her performing. But, no, heck no, this was way better than a simple performance. Instead, Mariah Carey’s Twitter got hacked, and the hackers are putting on a show.

Connor Miller is the reason why Mariah Carey got hacked, whoever that is. But, MC’s Twitter went all the way in on Eminem, and his entire lifestyle. Going in, the fans have been shocked, as they have MC trending number one, right now.

More in Hip Hop News
Blueface Avoids Jail Time in Felony Gun Case Involving Shooting at Man Who Was Robbing Him in 2018; Gets Three Years of Probation and Eight Days of Community Service
RIP Tuc Dolla and RBC Bugzy: Twitter mourns the loss of ATL figure, TucDolla, and rapper, RBC Bugzy, who were killed, last night; Bugzy was the brother of CJ Anderson of the Denver Broncos