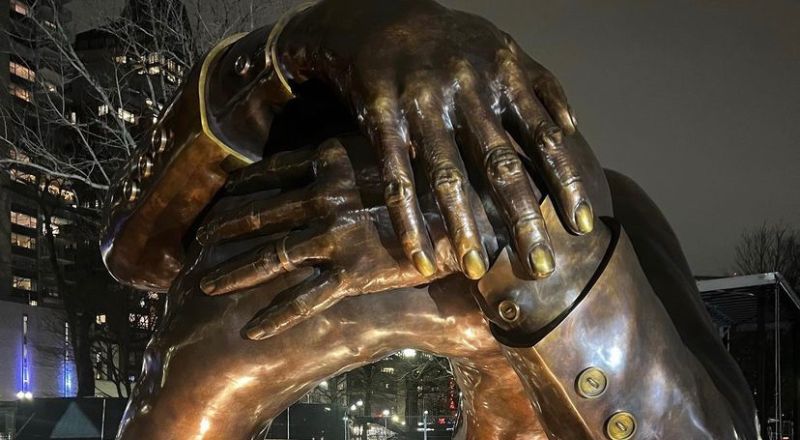 A new sculpture meant to honor a historic hero is facing backlash from the local community and social media. A an art sculpture dedicated to Martin Luther King Jr. and his wife Coretta Scott King was revealed this weekend. The piece designed by sculptor Hank Willis Thomas, is called “Embrace” inspired by a 1964 photo of Martin and Coretta hugging each other after his Nobel Peace Prize win. Although meant as a honorary gesture, the Martin Luther King Jr. statue received mixed reviews from social media.

Martin Luther King Jr. is one of the most respected, admired and celebrated black civil rights leaders in history. Known for his beliefs in ending segregation by nonviolence and civil disobedience, his legacy and influence is monumental. Among his impressive list of accolades, some of his most historical moments include his I Have a Dream speech, leading the March on Washington in 1963, The Montgomery bus boycott and the Selma to Montgomery voting marches.

Although a beloved leader, Martin Luther King Jr. passed away in 1968 by assassination. Shortly after his passing, a national holiday was established in his honor, inspiring sculptures like this new one. Despite the meaning behind the piece, social media felt it did not accurately display its intended purpose.