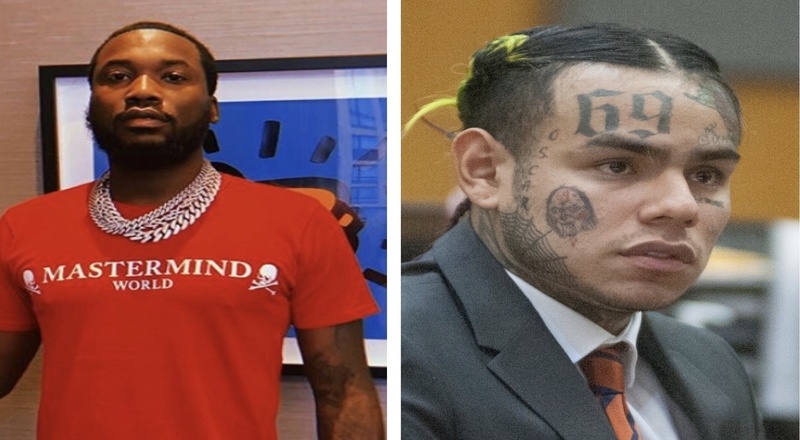 A few days ago, Tekashi 6ix9ine announced that he would go live on May 8 at 3pm on Instagram for the first time since his release. A May 8 announcement was put out last week with many believing it would be album or single-related. He’s expected to put out a new single when he goes live as well.

One who isn’t feeling 6ix9ine going Live is Meek Mill. He took to Twitter this afternoon to call the Brooklyn rapper an informant who’s trying to troll families he’s ruined. Meek added that we continued to see cops killing people but 6ix9ine is out here going live so he can feed rich white people.

As far as 6ix9ine’s upcoming single, Meek Mill says that it’s trash and that it’s “bulls*it.” It’ll definitely be interesting to see if Meek is addressed during this 3pm live session. 6ix9ine originally got out of prison after requesting to do so due to coronavirus concerns and his previous health issues. He will remain on house arrest until he is a free man in August. He was originally sentenced to two years in prison in December due to his racketeering case and crimes committed with the Nine Trey Bloods but he got credit for time served. He originally snitched on Nine Trey in court in September.

Check out Meek Mill coming after Tekashi 6ix9ine on Twitter below.

Continue Reading
You may also like...
Related Topics:6ix9ine, meek mill

More in Hip Hop News
Ginuwine shares photo of his beard and ends up being clowned, in his comments, for his slick hair and beard ends [PHOTOS]
BMF Co-Founder, Southwest T, Shows That Everything is All Good With Jeezy By Posting Throwback Photo With Him After 50 Cent Said Jeezy Was Ignoring Big Meech’s Mother’s Phone Calls About T Getting Released From Prison