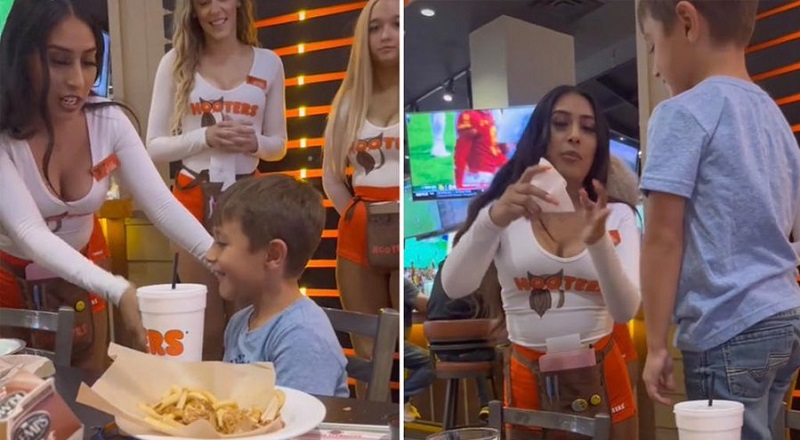 Nowadays, everybody has an opinion on everything. Social media has brought everybody together. At the same time, this is both good and bad. For a little boy’s fifth birthday, his parents took him to Hooters. They now are facing a ton of backlash, as a result. The same social media that is pushing all kinds of progressive lifestyles onto the masses are now supposedly outraged. With everything the impressionable youth are exposed to, this is where they choose to draw the line.

While social media is outraged over the incident, the little boy was having the time of his life. During the celebration, the parents were present, as the ladies gave the boy a beak for him to wear. The Hooters employees came over and began to sing “Happy Birthday” to the little boy. As the boy took in the ladies singing to him, the employees invited the entire restaurant to sing to him. Ultimately, a remixed version of “Happy Birthday” ended up being sang to the child.

After having the birthday party, the video went viral on TikTok. Meanwhile, the people on social media were initially dragging the parents. However, a number of people were in favor of the party. Many people saw it as innocent. There were others who saw it as cute. As a result, there were jokes about this little boy now becoming a man. In turn, the mother shared in with the jokes, giving the supporters replies of laughing emojis.

More in Hip Hop News
White woman who attacked two Black women at University of Kentucky, Sophia Rosing, is permanently banned from the campus and not able to reenlist
Video goes viral of high school student smoking in class, while the teacher was trying to teach [VIDEO]