Home » Hip Hop News » Nas Says He Got Too High To Finish Collaborations With The Notorious B.I.G. [VIDEO] 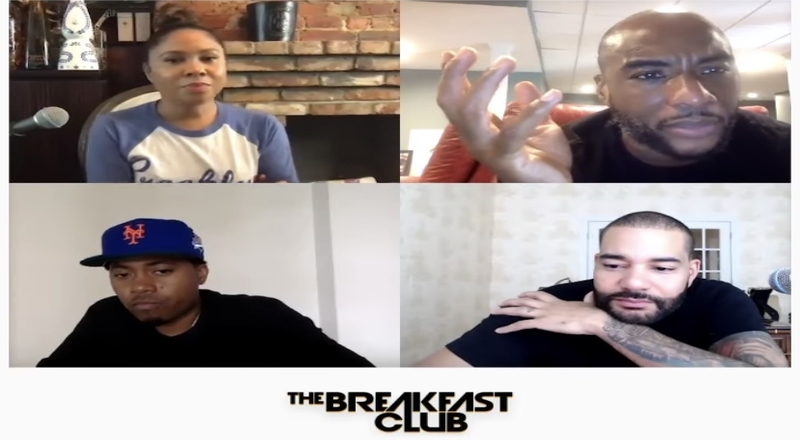 Last week, Nas released his 13th studio album, ‘King’s Disease,’ which was led by the single “Ultra Black.” The project was produced by Hit-Boy as it contains 13 tracks with features from Fivio Foreign, Big Sean, Foxy Brown, A$AP Ferg, and more. On Monday, the New York legend stopped by The Breakfast Club to discuss the project along with his career.

One topic that came up during the interview was the collaboration that everyone wanted Nas to do with The Notorious B.I.G. Nas revealed that they were actually in the studio but Biggie rolled up some weed that got Nas too high to finish the songs. The Queens native was supposed to do a few remixes  which included “Gimme The Loot” from BIG’s ‘Ready To Die‘ album.

“I got too high. I was in the studio and Big was rolling up some of that chocolate from Brooklyn and he didn’t warn me,” Nas explained. “It was just—I was zonked out, yo. There’s pictures of that session out there. Yeah, we was supposed to do a couple of songs. I was gon’ remix some stuff for Ready to Die.” Nas revealed that one of the tracks was Biggie’s “Gimme the Loot,” and when asked why he didn’t just return the next day, the King’s Disease emcee said he was “still high.”

Nas also added that at the time, he was living in Long Island, NY so it was a bit of a drag to get all the way to New York City. Collabs with himself and BIG would’ve been epic and they likely would’ve delivered some classics. Check out Nas explaining that situation from back in the day below.

Continue Reading
You may also like...
Related Topics:nas, the notorious b.i.g.

More in Hip Hop News
Black Kids Haven share photo of interracial couple, with their baby on Facebook, and show the cruel, racist, comments left by the mother, in the photo, about black people [PHOTO]
Noah Schnapp, from “Stranger Things,” is recorded on camera saying the “n-word,” and Twitter launches the #noahschnappisoverparty [VIDEO]