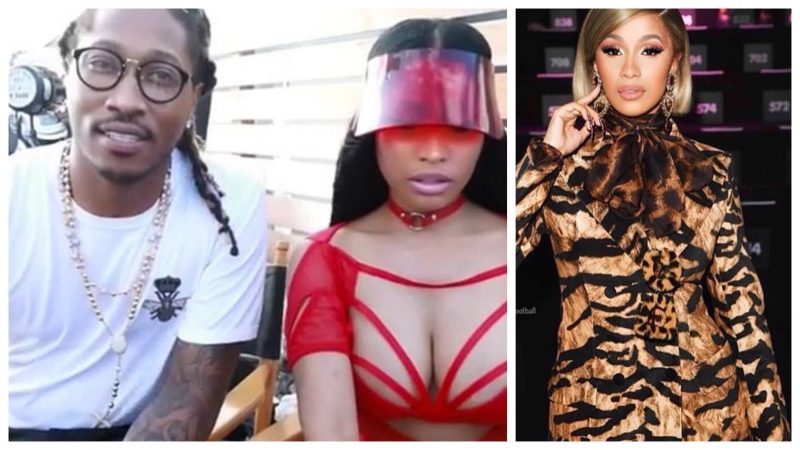 More details are coming to Surface about why Cardi B tried to attack Nicki Minaj during New York Fashion Week.

According to Hollywood Unlocked creator, Jason Lee, Future was originally supposed to collaborate with Cardi on her song “Drip.” Nicki allegedly told Future that if he collaborated with Cardi, she would drop him from her NICKIHNDRXX world tour.

“You heard the song ‘Drip’? […] Who is on that song?” Lee asked his co-hosts, who responded with “Migos.” “Guess who’s on there first? Future. Who’s touring with Nicki? Guess why Future ain’t on that song?”

Future never did the record, which is why Migos is on the version that appeared on Cardi’s debut album. This supports Cardi’s claims that Nicki has been working behind the scenes to sabotage her career.

After the altercation at NYFW, Cardi wrote;

“I let you attempt to stop my bags, fuck up the way I eat. You’ve threaten [sic] other artists in the industry, told them if they work with me you’ll stop fucking with them.”

Lee said he had the original version of “Drip” featuring Future and that version has now been leaked on social media.

Continue Reading
You may also like...
Related Topics:cardi b, drip (cardi b), future, nicki minaj

More in Hip Hop News
Garcelle Beauvais makes it clear her birthday post to Will Smith was meant as a joke, after people questioned if Fancy wanted smoke on Twitter [PHOTO]
Lil Wayne Announces #CarterV Album Will Officially Be Released On His Birthday