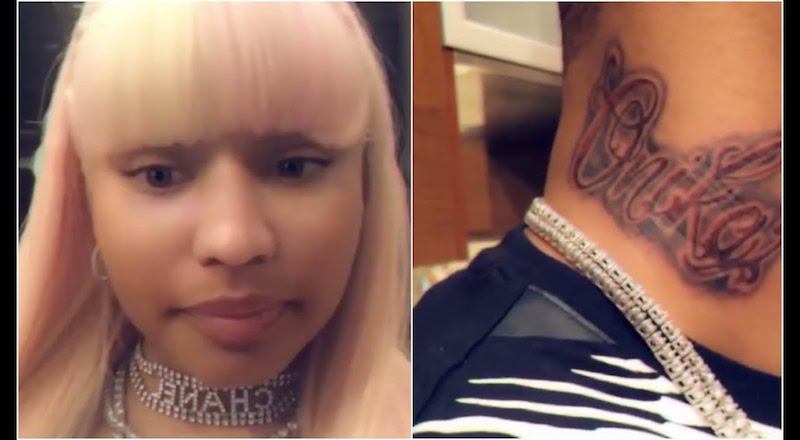 Kenneth “Zoo” Petty has permanently declared his love for Nicki Minaj. Recently Nicki announced that the two were exclusive via Instagram and last night (December 21st) she showcased how the two have taken their commitment to the next level.

The “Queen” rapper shared a video to Instagram. The video starts out as a selfie video of her looking into the camera fixing her hair with a fresh face before turning it to her bae debuting his very large new tattoo of the rapper’s legal first name. Nicki pans over the entire tat and gets a close up of his new ink. The pink and black inked “Onika” tattoo is written in cursive covering the entire right side of Petty’s neck.

The “Good Form” femcee questions Petty if it hurts, and he responds “No, not at all.” Even after all the drama surrounding the couples new relationship due to Petty’s past criminal record, Nicki is standing by her king and it seems as the two aren’t separating anytime soon. The two have known each other a lengthy time, since they were younger. So I mean it makes sense for their new display of affection. It got real, real quick, I mean her name is freshly inked on his neck!

Would you get your significant other’s name tatted on you?

Watch the clip below:

More in Hip Hop News
Cardi B Did It All In The #MoneyMusicVideo, From Breastfeeding Kulture To Swinging From Stripper Poles! This Has Only Made Twitter Love Her More #NormalizeBreastFeeding
Nicki Minaj is married to Kenneth Petty? Rumors surface that the popular rapper has been married to #NewBoy for “a while”