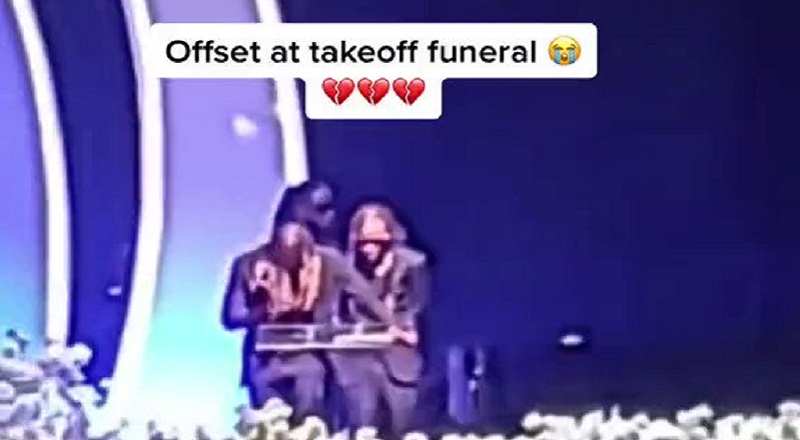 Offset breaks down crying during his speech at Takeoff’s funeral

Offset, along with Quavo and Takeoff, did something special with Migos. This was more than just some guys rapping. Actually being blood family, as Migos they brought true wealth into their family. As a result, their family had three instant millionaires. In addition, they became cultural icons. All of this took place within a decade of their breakthrough single, “Versace,” being released. Unfortunately, Migos came to an untimely end with the passing of Takeoff.

Offset, Quavo, and Takeoff all managed to build unique fan bases. While everyone loved Migos, they loved the members individually. Until last year, Migos appeared to be a united front. However, there was obvious separation among the guys. This was obvious, as Quavo and Takeoff began doing projects together. During a recent “Drink Champs” appearance, Takeoff made it clear he was going to finally take the spotlight for himself. After all, core Migos fans always said Takeoff was the best member.

Offset is going through the loss of his cousin, which seems to be overlooked by the media. Yes, there was a change within Migos, in terms of business, but these guys are blood. Not only are these guys blood related, but they also grew up like brothers. As a result, Offset spoke during Takeoff’s funeral, which was held today. When he was speaking on his cousin/brother, Offset got choked up, and he cried when sharing his memories of Takeoff.

Offset breaks down crying during his speech at Takeoff’s funeral

Offset breaks down in tears during his speech at Takeoff’s memorial service 🙏🕊💔pic.twitter.com/kfSXqVCMoC