Home » Hip Hop News » Polo G Celebrates Having Number One Song and Album in 2021; Says “Hall Of Fame” Deluxe Edition is on The Way 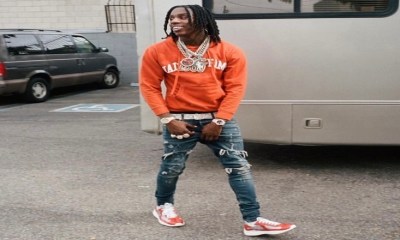 Polo G has been one of the biggest stars of 2021, as in April, he scored his first number one single in “RAPSTAR.” It also went on to be certified platinum in the US. Two weeks ago, the Chicago rapper also delivered his third studio album, “Hall Of Fame.” That won big as well, as that debuted at number one on the Billboard 200 chart.

Polo G is now giving himself big props for his latest accomplishments, and ensures that more moves are on the way. He took to Twitter to say “Stop f*ckin playin W me like I ain’t just have the #1 song & Album in the Same Year.” On Instagram, he also boasted about his accolades, and also revealed that the deluxe edition for Hall Of Fame is on the way.

“3rd Album In 3rd Project Period & I just keep goin Up…#1 song & Album Same Year😈Peep The Headlines Young N*gga Makin History & Sum more s*it & did it all @ 22yrs old🙇🏾 I ain’t get this Far Bulls*ittin or puttin out Bulls*it just lettin my talent speak…. I still got long Wayys To go tho💯I Appreciate everybody who supporting me No matter What🖤🤞🏾Shout out to my team most importantly…..DELUXE OTW🔥🔥🔥🔥🔥🔥 #HallofFame2.0”

Polo has put out three albums since 2019, with his previous project being “The GOAT,” last summer. That debuted at number two on the Billboard 200. Since then, he’s been going nowhere but up, and is in position to have plenty more number one albums in the future. Hall Of Fame gave fans plenty of material, with 20 tracks, and appearances from Nicki Minaj, DaBaby, Young Thug, Roddy Ricch, the late Pop Smoke, and more.