Home » Hip Hop News » Prayers for Tua: Tua Tagovailoa got hit with a hip injury, at halftime, as Alabama #CrimsonTide, played MS State, and fans on Twitter are lifting prayers for Tua 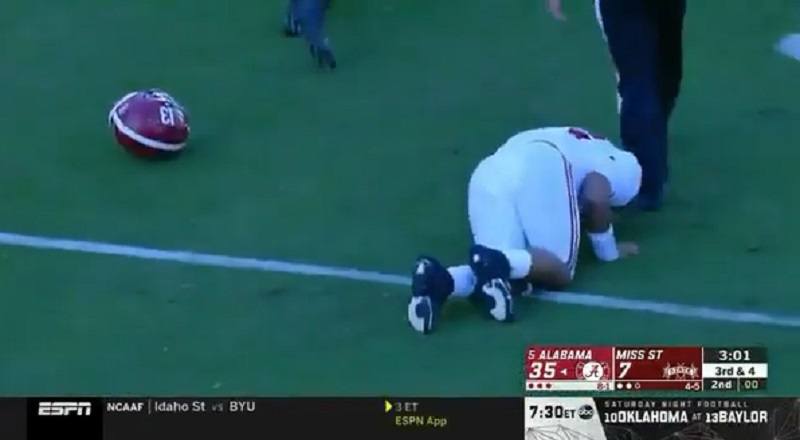 This afternoon was ESPN’s College Football Saturday and Alabama’s Crimson Tide was playing. Their star quarterback, Tua Tagovailoa, ended up sustaining major injury. He wanted to play, in spite of the coach, Nick Saban, not wanting him to.

Ultimately, Saban was right, as Tagovailoa ended up sustaining a major hip injury, just before halftime. While Alabama cruised to the win, over rivals, Mississippi State, their star player is gone. Now, his future is impacted by this whole situation.

Tagovailoa definitely is in need of support, as his injury could be career-altering. More than likely, after college, he has hopes of playing professionally in the NFL. But, most of all, he just doesn’t want to be in pain, so Twitter is sending their prayers up for Tua Tagovailoa.

Watch the injury video and read the tweets about Tua Tagovailoa below:

More in Hip Hop News
Omarion and his level of unbothered! Twitter is here for how O handled Fizz and Apryl, giving him props for sounding mature, wishing them well, and is labeled a real one for his maturity, as fellas remind how me made “Touch” and “Ice Box”
#ToryLanez has the number one rap album, with #Chixtape5, and Twitter is showing him much love and support for being #1