Home » Hip Hop News » #PreciateItPimp… Yes, Black Twitter is at it again, @Ronoo_ reveals he got dumped via Twitter DM and his #preciateitpimp response took the internet 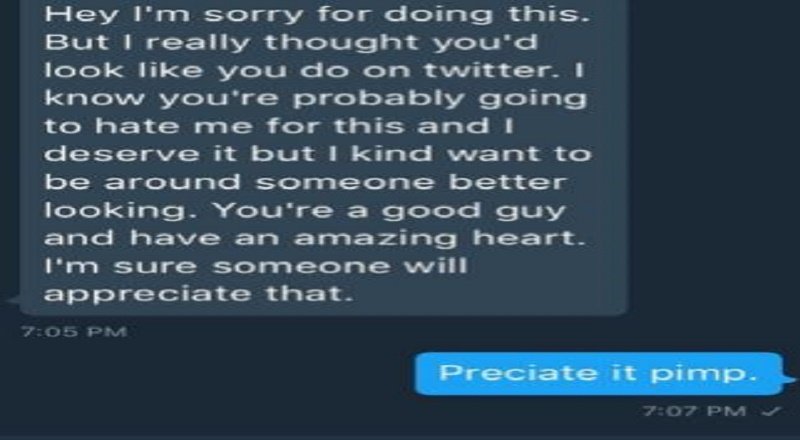 When it comes to being dumped, Justin Timberlake was the go-to guy for how to handle those situations. However, as Justin has changed to happier tunes, someone has emerged to fill his void. Surprisingly, it isn’t a new singer who has done it.

Instead, during this past summer, there was a text circulating the internet. A girl began talking to a guy on Twitter and she initially fell for him, but took it back after seeing him in person. As she tried relaying this message in the DM, it took an unexpected turn.

Likely expecting the guy to be broken up over it, he surprised her, hitting her with a “Preciate it pimp” response. It was hilarious and he had social media laughing. Tonight, he is causing people to create scenarios, online, so they can use the phrase that he should have patented.

Read the #PreciateItPimp tweets below:

More in Hip Hop News
Lee Daniels is reportedly casting for a biopic on Bobbi Kristina for TV One
Montana of 300 says he is the best rapper in the game, period, and says he can out-rap “anybody” [PHOTO]