Home » Hip Hop News » Protesters have completely stormed US Capitol Building, taking the Senate Floor, with protester taking over the top seat in the US Capitol, normally reserved for the President, Vice President, and the Speaker of the House 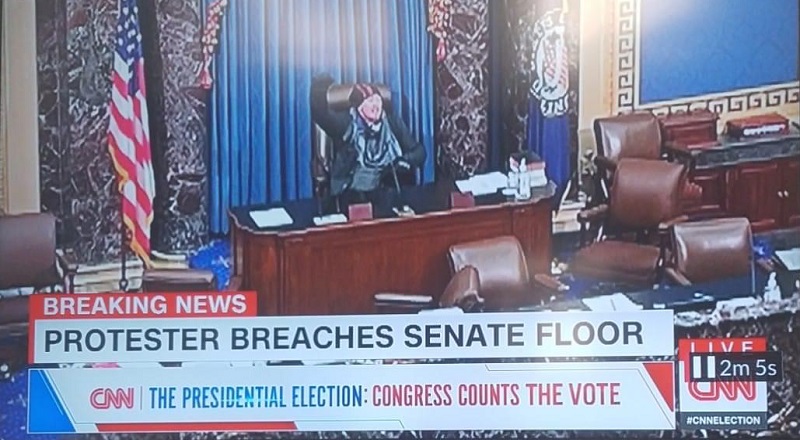 Early this morning, history was made, in Georgia, with the election of the state’s first black Senator, Raphael Warnock. Hours later, Jon Ossoff was elected to Georgia’s other Senate seat. Their elections came hours before the Senate was to vote on the electoral college.

Already, many members of the Republican Party said they intended to challenge Joe Biden’s electoral victory. Since he won the presidency, current president, Donald Trump, has claimed Biden’s win was illegitimate. However, there was no evidence to back this up.

Donald Trump encouraged people to protest, in the days leading up to the electoral college vote, by the US Senate and US House. Today, these protesters overtook law enforcement and flooded the Capitol Building and taking over the Senate Floor. One protester made his way to the top spot, normally reserved for the President, Vice President, and Speaker of the House.

More in Hip Hop News
Future’s 2020 “Life Is Good” Single With Drake Hits 8x Platinum Status
Burglars Tried To Break Into Dr. Dre’s Home After News Of Him Being Hospitalized With Brain Aneurysm