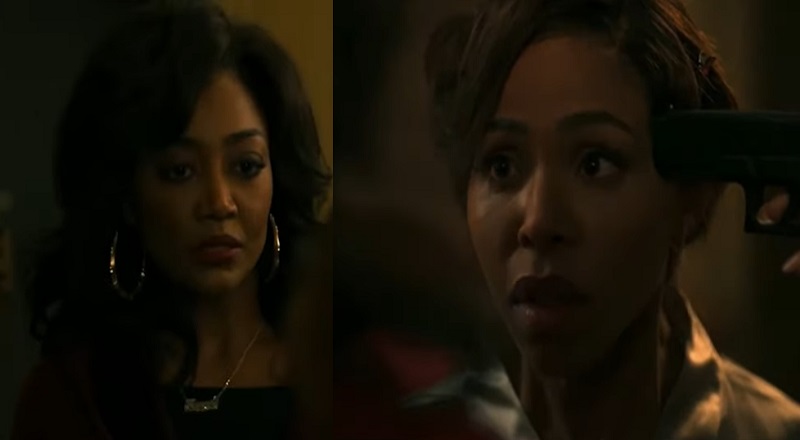 Raising Kanan fans believe Raq will get rid of Palomar

Season two of “Raising Kanan” has been filled with many twists and turns. After initially resisting, Raq (Patina Miller) has allowed Kanan (Mekai Curtis) to get in the game. Unlike last season, Kanan has actually stepped up. Not only is Kanan moving money around, when he confronted the guys who robbed him and Famous (Antonio Ortiz), he showed flashes of 50 Cent’s Kanan from the original “Power.”

The young Kanan, meanwhile, has finally found a girlfriend. Of course, during season one, Kanan was all about Davina (Lovie Simone), who was never really into him. However, when she finally gave Kanan a chance, she got information out of him. As a result, Kanan’s family’s stash house was revealed. All of that led to Raq and Unique (Joey Bada$$) having a much bigger war. This, along with Marvin (London Brown) joining Kanan in putting that product out, resulted in much fallout, including Jukebox’s (Hailey Kilgore) girlfriend, Nicole (Annabelle Zasowski) passing.

Kanan now has a girlfriend who is all about him, in Corinne (Josephine Lawrence). When the audience met Corinne, they also met her mother, Palomar (KJ Smith). Upon meeting Palmoar, Kanan spoke for the audience when he said she looks more like Corinne’s sister. Fans also picked up on Palomar’s attraction to Kanan. First, Palmoar gave Kanan a weapon, and a passionate kiss on the cheek. After that, Palmoar did get Kanan into bed, which led to Corinne walking in on them. At the end of last week’s episode, Corinne told Raq. In the trailer for season two, episode eight, Raq confronts Palomar over Kanan. Fans feel Palomar won’t stop and Raq will actually have to handle her.

Raising Kanan fans believe Raq will get rid of Palomar

More in Hip Hop News
Tia Mowry breaks silence on filing for divorce from Cory Hardrict, saying they will always be friends and co-parents [PHOTO]
Trina wins Twitter with her BET Hip Hop Awards speech and fans say she looked good on stage, but ask why she didn’t perform [VIDEO]