Home » Hip Hop News » Ray Allen is out golfing with George Lopez, while Paul Pierce is having his jersey retired; Twitter is upset, because Rajon Rondo, Doc Rivers, and Kevin Garnett are at Cavs vs Celtics game #BOSvsCLE #NBAonABC 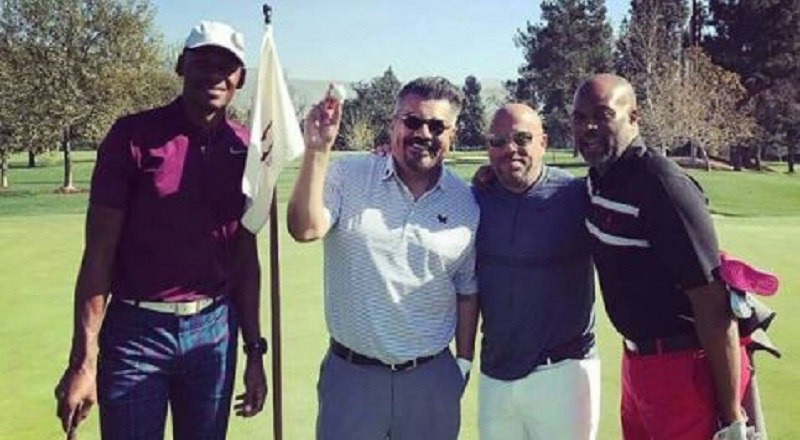 A lot of Boston Celtics fans got really upset, when Ray Allen left, in free agency to join the Miami Heat. Dude signed with the Heat, just weeks after the Celtics lost to them, for the second straight year. Then, he went and hit the clutch three-pointer to beat the Spurs.

Ray Allen was a part of the “Big 3” Boston Celtics era, when he was traded, along with Kevin Garnett, to join Paul Pierce. In their first season, the Celtics won their only title. Two years later, they came close to winning another, but Kobe Bryant’s Lakers won two straight.

Because Ray Allen helped Miami win two straight, he got two rings, instead of the one his former teammates got. The next couple of seasons in the league were tense, but they’ve all retired now, except for Rondo. Today, Rondo, along with KG and Doc Rivers were at the Celtics’ game against Cleveland, for Pierce’s jersey retirement, and Twitter is going in on Ray Allen for golfing with George Lopez and Chris Spencer.

Read the tweets about Ray Allen below:

More in Hip Hop News
Cavs vs Celtics already got fans going at it, Twitter is going in on Celtics fans for cheering when LeBron injured his knee + J.R. Smith with the dunk of the year #NBAonABC
New Cavs are dangerous and fun to watch, as they blew the Celtics out, NBA Twitter still doesn’t think they can beat the Warriors, though #CavsCeltics #NBAonABC