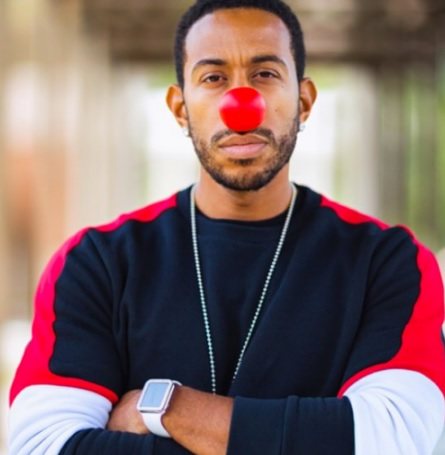 Yes that’s true!!! Amongst 65 other celebs, Ludacris weighs in on the Red Nose Love!!! You, and when I say you, we mean the amazing reader that’s taking the time to read this, might not be a celebrity but German App developer Zoobe has created a way for everyone to raise the awareness for this incredible day of giving! Zoobe a leading character voice-messaging app, is lending its support to the world-renowned Red Nose Day movement by releasing a #RedNoseBunny character that app fans can customize and post on Facebook and other social media platforms. Zoobe encourages its fans to share the lovable Red Nose Bunny and their customized voice messages online to help raise awareness of kids in need in the U.S. and across the globe.

Red Nose Day, taking place Thursday, May 26, has raised over $1 billion globally over the past 25 years and continues to bring people together to change lives. Zoobe, whose 3D animated characters perform their user’s voice messages in easy-to-share video clips, has offered its support as a digital partner in raising awareness for this important cause.

“Zoobe is proud to be able to create and contribute our #RedNoseBunny character and technology to such a heartfelt cause, which has already helped to make a difference in so many kids’ lives. Being able to participate in a movement that is bigger than any one person, is an excellent opportunity to think global and act local!” says Norbert Richard Meinike, Zoobe’s Chief Marketing Officer.

Zoobe, who recently released their media acclaimed Amber Rose “MUVA” character, creatively bridges the entertainment and emerging messaging technologies. More than 220 million Zoobe video messages have been created by app users worldwide since its launch. The tech company specializes in creating special digital moments as a tool to further deepen the tangible connection among celebrities, brands and their fans.

Download the free Zoobe app on iTunes and Google Play or http://www.zoobe.com/download to access Zoobe’s #RedNoseBunny for Red Nose Day.

Zoobe is the leading character voice-messaging app that works for both iOS and Android. Its global success is based on a unique, patent-protected, technology. It enables 3D animated characters to perform their user’s voice messages and then creates easy-to-share video clips. Through its expressive power Zoobe redefines how we connect with each other in our daily smartphone communication. Since its launch more than 220 million Zoobe video messages have been created worldwide. This international reach has led to major partnerships with companies such as Sony Pictures, Capcom, ZeptoLab, WWF, AIS, Studio Canal and more. The app has an ever-increasing cast of famous characters to choose from and its technology is available as an SDK kit for implementation in other apps. In 2015 the app was featured on NBC’s Today Show and the New York Times. Visit www.zoobe.com for more info.