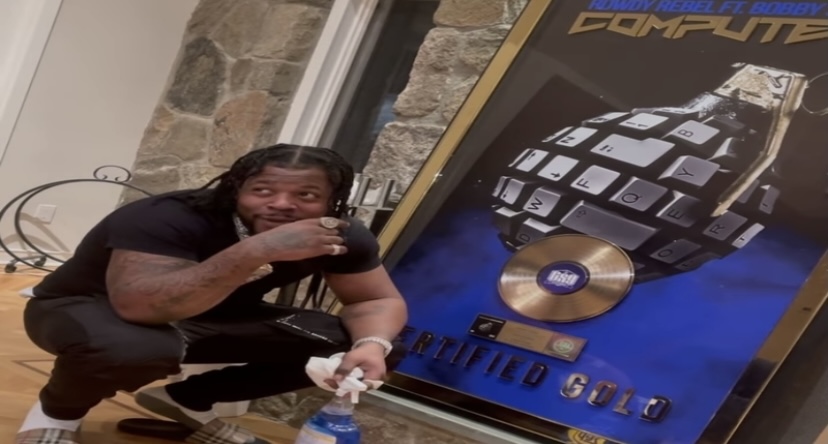 This week was a huge one for Bobby Shmurda as he was finally freed from prison after almost seven years. He was greeted with a private jet by Quavo and his crew and also hit the club for a welcome home party.

The day of Bobby’s release, his music from his breakout 2014 received RIAA certifications. Bobby’s mega hit single, “Hot N*gga,” went 5x platinum, the “Bobby B*tch” is platinum, and the “Shmurda She Wrote” EP is gold. Now, his close friend, Rowdy Rebel, is also receiving a plaque.

This plaque is for Rowdy’s 2014 “Computers” single, which also featured Bobby. He just took to his Instagram feed to show himself celebrating. He thanked Bobby, his fans, Epic Records, and more.

“I want to take this moment to thank my fans, @Epicrecords , friends and family last but not least my little big bro @realbobbyshmurdags9 and just everyone who was a part of making “Computers” that anthem that still rings off til today!” Rowdy wrote. “I promise you guys it’s only the beginning I have so much more in store for you guys…. stay tuned.”

Rowdy was released from prison in December after serving six years. He was originally supposed to do 12 years but Bobby took almost seven in order for Rowdy to do less time. They’ve definitely been the best of friends for a very long time and are sure to put out when more hot music together.

Check out Rowdy Rebel celebrating the gold plaque along with the music video for “Computers” below.

More in Hip Hop News
Night Lovell – “Counting Down The List” [VIDEO]
What Is Going On, Here? Kash Doll gets into hilarious Twitter exchange, with Kevin Durant, where she said “all these n*ggas wanna f*ck KD,” and the two playfully argue over who the real KD is; Kash Doll says they argue about this all the time