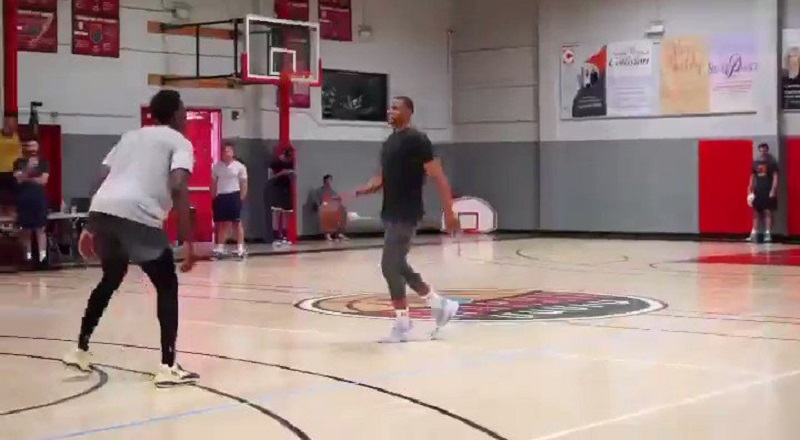 Russell Westbrook shouts GAME TIME as he misses his shot

Russell Westbrook is one of the best players in the NBA, but he didn’t look like it, this past year. Westbrook was Kevin Durant’s running mate, with the Oklahoma City Thunder. Together, Westbrook and Durant took the Thunder, which were essentially an expansion team, and turned them into a title contender.

Russell Westbrook became the second MVP, in Thunder history, in 2017. Westbrook’s win was rare, seeing how his Thunder were a six seed, that year. After losing KD, Russ got his super team, when Paul George and Carmelo Anthony. A lot of people predicted it would go just as badly as it did. On paper, the Thunder should have competed with KD’s Warriors, though.

Russell Westbrook has become a journeyman. Last season, Westbrook played for the Lakers, which were his third team in as many years. However, Westbrook and Carmelo reunited, playing with LeBron James and Anthony Davis should have been a championship, on paper. With that, the roster also included Dwight Howard and Rajon Rondo. Instead of a title, the Lakers went 33-49, only two years removed from a championship. Westbrook shouldered much of that blame. During a recent practice, Westbrook screamed “GAME TIME,” as he took a shot. Him missing has done nothing to help his reputation.

Russell Westbrook shouts GAME TIME as he misses his shot