Home » Hip Hop News » Sha’Carri Richardson Subliminally Disses Jamaicans, After “Liking” Tweet, About Jamaicans Having to Walk Barefoot, to Their Coconut Stands, For a Living 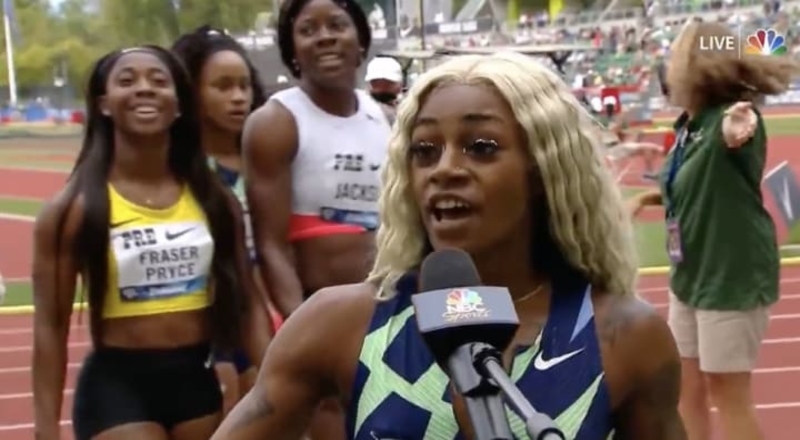 Last week, Sha’Carri Richardson had social media on fire, after finishing last, in the women’s 100 meter race, at the Prefontaine Classic, in Eugene, OR. The winner ended up being Jamaica’s Elaine Thompson-Herah, who is the fastest woman in the world. The second and third spots went to Jamaica’s Shelly-Ann Fraser-Pryce and Sherika Jackson, as Jamaica swept this event again, just like in the 2020 Tokyo Olympics.

Sha’Carri has been trying to keep a mindset of bouncing back soon, but seems bitter in the process. She previously “liked” a tweet about Fraser-Pryce looking like Lil Wayne, and even dissing US track legend Allyson Felix. Now, things are getting worse. On Wednesday, Twitter noticed that the US track star, liked a tweet, which dissed Jamaicans in general.

This tweet read “Not y’all Jamaicans still talking shit when y’all gotta walk barefoot to your coconut stand everyday for a living.” It’s unclear if Sha’Carri did this on her own with the “like” button, or if someone on her team did. Many assume that she doesn’t have any PR rep right now though, due to the controversy she continues to generate.

Check out the xenophobic tweet that Sha’Carri Richardson liked below.

More in Hip Hop News
Instagram has been taken over by “nah he tweakin” and “nah she tweakin” comments #nahhetweakin #nahshetweakin
Alexis Sky literally swims with sharks, conquering her lifelong fear [VIDEO]