Home » Hip Hop News » Shannon Sharpe gets into heated argument with Memphis Grizzlies and almost got into altercation with Ja Morant’s father, in the middle of the game [VIDEO] 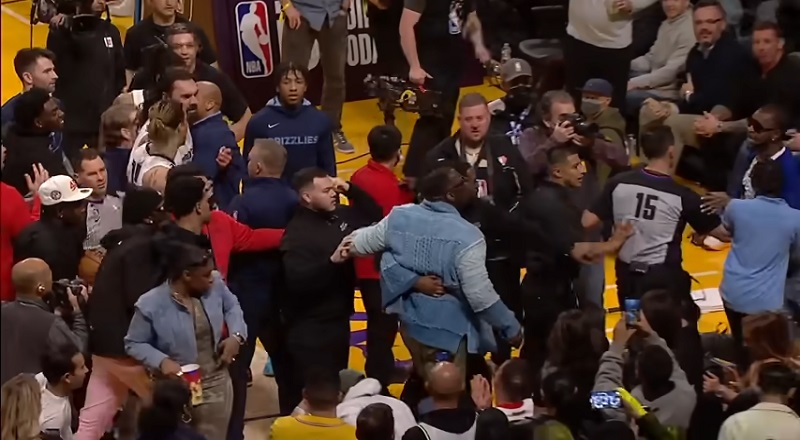 Shannon Sharpe gets into altercation with Memphis Grizzlies

Shannon Sharpe is one of the most outspoken people in sports media. Lately, he has gotten a lot of attention, due to his in-show arguments with Skip Bayless. While the world has watched what they believe is Shannon and Skip’s fallout, he gave fans a show, last night. When the Memphis Grizzlies played the Los Angeles Lakers, they ended up taking Shannon Sharpe on. The argument was so intense that Ja Morant’s father, Tee, stepped in. As a result, Tee and Shannon almost got into it.

Shannon Sharpe is often controversial, given his hot takes on sports. Not only does Sharpe have outrageous takes, he also stands so loudly on them. As a result, he comes off as argumentative, even when he isn’t. This is why all of his arguments with Skip Bayless have gone viral, lately. Both Shannon Sharpe and Skip have confrontational personalities and tones. What could simply be a normal debate between the two is being blown up by fans on social media.

Shannon Sharpe was at the Los Angeles Lakers’ home game against the Memphis Grizzlies. Last night, Sharpe ended up heckling the Grizzlies. In turn, words ended up being exchanged. As a result, Steven Adams walked up to Shannon Sharpe, confronting him. Soon, the whole Grizzlies’ roster came for Sharpe. In the middle of this, Tee Morant, Ja’s dad, stepped into it and things got really intense with him and Shannon Sharpe.

Shannon Sharpe gets into altercation with Memphis Grizzlies

Shannon Sharpe wanted all of the smoke pic.twitter.com/oTkrbiH5cS