Home » Hip Hop News » Takeoff mural has been added in Atlanta off the Atlanta Beltline, near Old Fourth Ward [PHOTO] 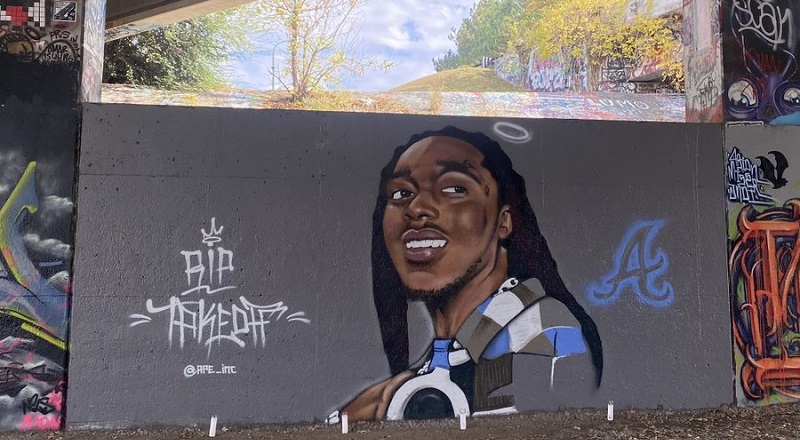 Takeoff mural has been added off the Atlanta Beltline

Takeoff was the most promising member of Migos. While the core fans have always said Takeoff was their favorite, mainstream fans were torn between Quavo and Offset. As a result, more casual fans did not take on to Takeoff until “Motorsport.” The line Takeoff had about Nicki Minaj made him a legend in the eyes of many. Before his passing, Takeoff said he was coming for all of those flowers.

Takeoff and Quavo silently split from Migos, at the end of last year. As many may remember, there were some odd things going on. At one point, there were rumors of Migos having beef with Lil Baby. Collectively, they are the flagship artists of the Quality Control label. As a result, peace was the best option for them all. Meanwhile, the beef seemed to be more between Offset and Lil Baby. After that, Takeoff and Quavo began doing more joint projects. Since 2018, Offset has done solo work.

Takeoff had the misfortune of standing in the wrong place during a misunderstanding that did not involve him. There was a dice game that Quavo was participating in that got heated. Once Quavo began arguing, things got heated and shots were fired. As a result, Takeoff ended up being hit by a stray shot, which cost him his life. Now, everyone has come together to mourn the loss of a promising young man. It is unfortunate that these issues could not have been settled while Takeoff was still alive, as Offset changed his Instagram profile photo to him. In addition, a mural in Takeoff’s honor went up in his hometown of Atlanta, near the Beltline.

Takeoff mural has been added off the Atlanta Beltline

More in Hip Hop News
Matt Ryan hits impossible three pointer to send Lakers into overtime vs. New Orleans Pelicans [VIDEO]
Malcolm-Jamal Warner blasts FOX for putting the hyphen in his name in the wrong place, despite him starring in a show on the network [PHOTO]