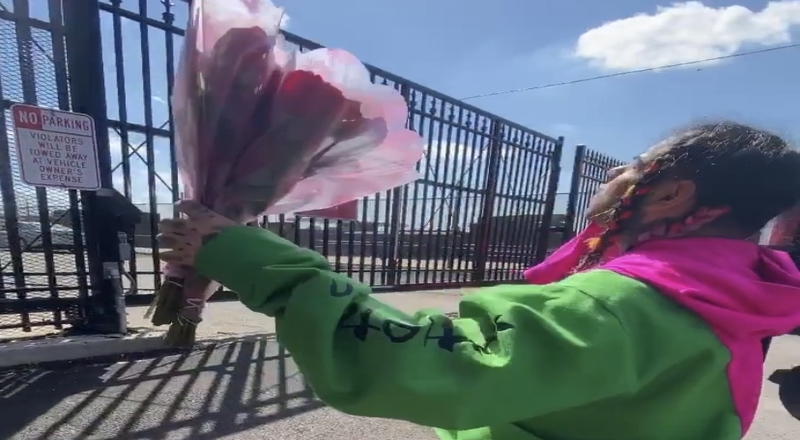 This week, Tekashi 6ix9ine announced that his sophmore album, ‘Tattle Tales,’ would be released on September 4. This was done while roaming the streets of Chicago. His visit to the city has since been condemned by stars of the city such as Lil Reese and Lil Durk.

6ixi9ne ended up clowning Reese after he dissed him by responding with a reenactment of Reese soiling himself while getting jumped. After posting a video on Instagram of himself getting food on the south side of Chicago yesterday, 6ix9ine has now posted a video of himself paying homage to Durk’s cousin, Nuski.

6ix9ine brought some flowers to the O Block of Chicago as he said Durk’s cousin was shot and killed there. The Brooklyn rapper said that the community needs to change in regards to gun violence. He also promoted the Tattle Tales album in this post.

“CAME TO OBLOCK .. came to pay my respect to @lildurk cousin nuski who was killed by gun violence 💔💔💔 we need to change as a community 💔💔💔💔😒😒😒 #RIP NUSKI PRE ORDER THE ALBUM LINK IN MY BIO SEPTEMBER 4.”

This also comes after people believed that Durk dissed 6ix9ine on his feature on Drake’s new “Laugh Now Cry Later” single where he supposedly subliminally called 6ix9ine a rat. Durk also recently said “Damn the feds in Chicago everybody go inside” regarding 6ix9ine’s visit to Chicago. It’s unknown if 6ix9ine was truly paying homage to Durk’s cousin or if he was just trolling as he always does.