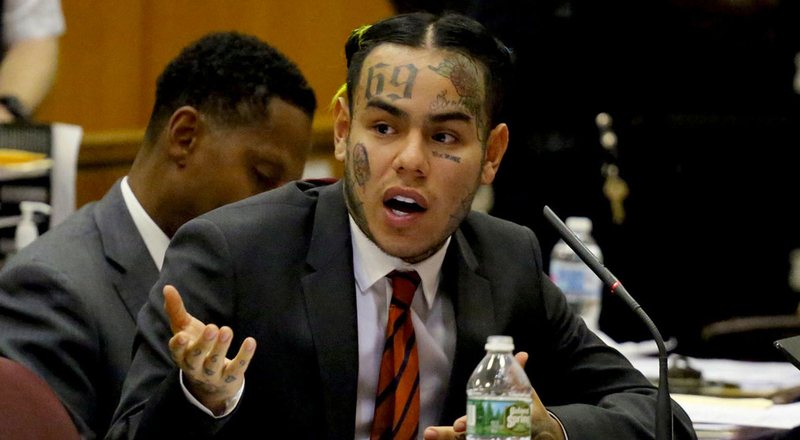 Today is officially Tekashi 6ix9ine’s sentencing for his racketeering, murder conspiracy, drugs and weapons case involving crimes he supposedly committed with the Nine Trey Bloods. He was taken into federal custody last November and has been locked up since. In September of this year, he testified against Nine Trey and added that Jim Jones is part of the gang and that Cardi B and Trippie Redd are gang affiliated as well.

Judge Engelmayer is handling 6ix9ine’s sentencing in New York today and right now, it doesn’t look good for the Brooklyn rapper at all. According to the Inner City Press, He is giving 6ix9ine props for his cooperation throughout the last 13 months he’s been locked up. The bad news is that 6ix9ine’s actions are viewed as too violent and selfish to make 13 months reasonable. In the end, 6ix9ine will not be released from prison today.

6ix9ine’s attorney, Lance Lazzaro, vouched for 6ix9ine cooperating as well as he said the rapper took down Nine Trey. He added that 6ix9ine isn’t a bad kid and if he was allowed to be freed today, Judge Engelmayer wouldn’t see him in court again. Judge Enelmayer did cite though how 6ix9ine admitted to attempted murder, the Casanova beef, and putting a hit out on Chief Keep that almost got him shot and killed. Everyone didn’t forget about 6ix9ine having sex with an underage girl either as the Judge also noted that this is a huge factor as well.

6ix9ine says he failed the kids and a priority of his now is to help low income families. 6ix9ine was definitely on his way to super stardom. After being taken into custody last fall, his debut album “Dummy Boy” was released and peaked at No. 2 on the Billboard 200 chart. Earlier that year, he broke out with his hit single “GUMMO.”

A ruling has now been made and 6ix9ine will serve 24 months with five years of supervised release. He will get credit for time served though. It’s definitely a bittersweet end for 6ix9ine as he tossed every blessing away for bad decisions.

Judge Engelmayer: Mr Hernandez, please rise. It is the judgment of the court you are to serve a term of 24 months in prison, with five years of supervised release.