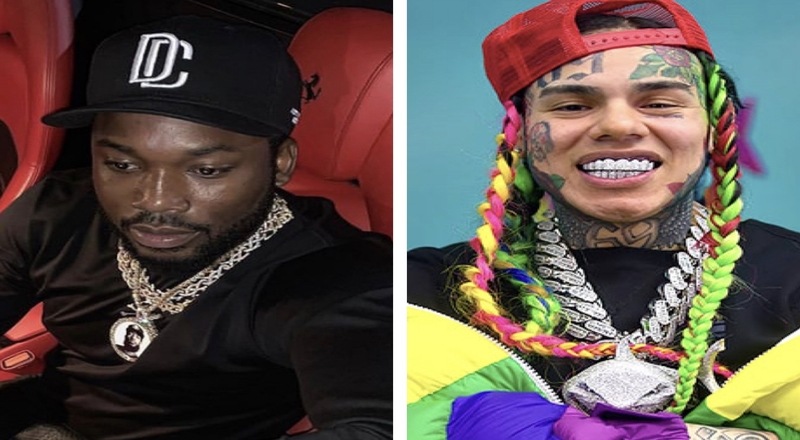 Tekashi 6ix9ine postponed the release of his new “Trollz” single today due to what’s currently happening in America with its police brutality issues. Some artists are putting out songs dedicated to these times though such as Trey Songz’s “2020 Riots: How Many Times” and Meek Mill’s new “Other Side of America.'”

Meek has had issues with 6ix9ine since 6ix9une got out of prison last month. This is due to the Brooklyn rapper snitching on the Nine Trey Bloods last fall. Now, 6ix9ine is taking the chance to come after Meek on social media as he’s mad that Meek dropped new music during what’s happening in the country even though it’s bringing awareness.

6ix9ine took to Instagram to call Meek a “wannabe Martin Luther King” and wonders why he isn’t out protesting like Kanye West is. He also believes that Meek is trying to capitalize off of what’s happening with the release of this song. Meek has always been very vocal about social injustices in this country such as racism and police brutality. This record is more evidence of that. 6ix9ine needs to relax because he’s doing more trolling and not focusing on the issues in America. He himself said that he can’t speak on them since he’s still on house arrest.

Continue Reading
You may also like...
Related Topics:6ix9ine, meek mill

More in Hip Hop News
Kodak Black Avoids 15 Years in Prison as ‘Possession of a Firearm By a Prohibited Person’ Felony Charges Are Dropped So He Can Attend Drug Treatment; Currently Serving 46-Month Sentence
Jonathan Shew, a South Carolina-based Mortgage Loan Officer, suggests that black people should be pushed into the water, doubting that “few of them can swim,” would drown in water deeper than one foot, and hopefully enough die to end the arson and looting, in Facebook comment [PHOTO]