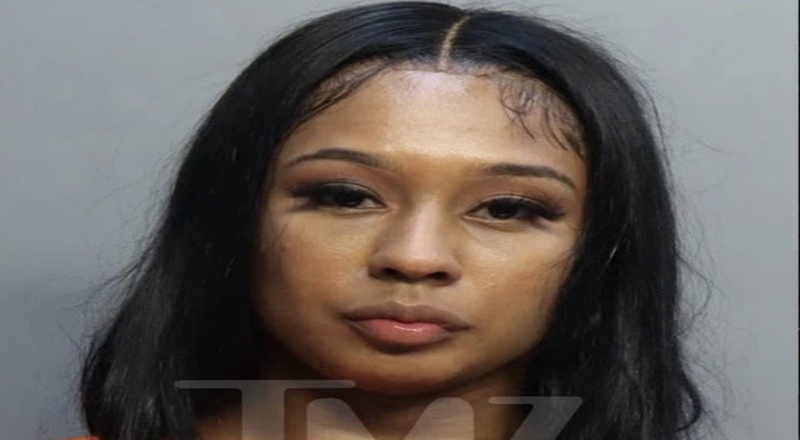 Tekashi 6ix9ine has been very quiet on social media, for a while now. This has been the case since earlier this spring, when he made his initial comeback. At the time, 6ix9ine released his “GÍNE” single, and beefed with Fivio Foreign about the “King of New York” title.

Now, 6ix9ine is trending for the first time in a while, due to a situation with his girlfriend, Jade. According to TMZ, Jade was arrested on a battery charge, on Sunday night. This came after the two got into an argument at a Miami nightclub.

6ix9ine was with Jade, and also with a group of women. One of the women supposedly threw a punch at 6ix9ine, and eventually he and Jade were arguing. Jade supposedly soon hit him, as he had visible injuries. Witnesses went on to tell police that Jade even allegedly attempted to grab 6ix9ine’s chain.

6ix9ine didn’t want to speak to police though, as Jade went on to be taken to the Miami-Dade County Jail. Her bail was set at $1,500. 6ix9ine did go on to tell TMZ that he believes she was drunk, and her friends encouraged her to hit him. 6ix9ine does plan on posting her bail, though. They’ve been together since 2018.

“I’m gonna get her out jail — she attacked me in front of the police I told them, ‘You have to evaluate her she’s obviously under the influence I don’t plan to press charges … I’m the one trying to bail her out.”

Continue Reading
You may also like...
Related Topics:featured, Tekashi 6ix9ine

More in Hip Hop News
Chris Brown lookalike, Tyson Wuthi, denies that he’s charging fans $1,500, for meet and greets
Ja Morant shows off Memphis mansions that he and his dad have now, as they’re neighbors [VIDEO]