Home » Articles » Tekashi 6ix9ine’s Girlfriend, Jade, Posts New Photo With Him in Prison and Defends Him Snitching on Nine Trey Bloods – “Sammy The Bull Kills 19 People and Gets 5 Years, You Kill No One and Get 2” 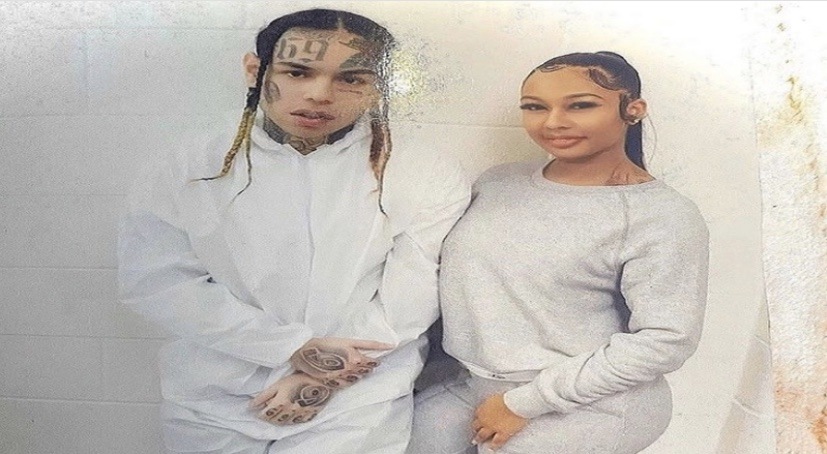 Tekashi 6ix9ine’s request to serve the rest of his two-year prison sentence at home was denied by Judge Paul Englemayer today as he felt that 6ix9ine needs to pay for the severity of his crimes. He was given 14 months of credit for time served at his trial last month though and can get out late this summer.

6ix9ine was originally facing 47 years on federal racketeering charges and his involvement in crimes with the Nine Trey Bloods. His girlfriend, Jade, has now posted a new prison photo with him and is defending what he did in court.

Jade says how Nine Trey were the ones who kidnapped him last summer, had sex with his baby mama, Sara Molina, got caught on the phone plotting on him, and trying to steal money as well. She made the point that if he didn’t snitch, he would’ve gotten 47 years and if he did, people would label him as a rat. He was robbed by Nine Trey of his jewelry in Brooklyn in the summer of 2018.

Jade even compared 6ix9ine to Sammy The Bull, the man who helped John Gotti kill 19 people. She explained how he only got five years for this crime and 6ix9ine still got two years and he didn’t kill anyone. Part of this case though is that 6ix9ine was investigated for murder conspiracy.

Jade concluded by saying how much she loves 6ix9ine and bragged going 13x platinum, 8x gold, and how the Internet hasn’t been the same since he got locked up. Check out her IG post below.

Continue Reading
You may also like...
Related Topics:6ix9ine, jade

More in Articles
Tekashi 6ix9ine Denied Request To Serve Rest of Two-Year Prison Sentence at Home Due To Severity of His Crimes
Tekashi 6ix9ine’s Baby Mama, Sara Molina, Calls Out His Girlfriend Jade After Saying Nine Trey Bloods Had Sex With Her; Says 6ix9ine Got With Jade While She Was Still With Him [PHOTOS]