Home » Hip Hop News » Telvin Smith, linebacker for the Jacksonville Jaguars, gets put in handcuffs by the police, and his home searched; Neighbors say he was put in police car and Crime Scene Unit left his house [VIDEOS] 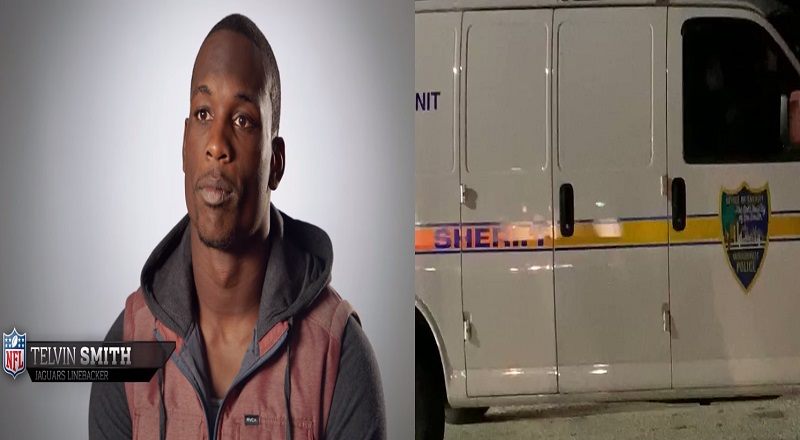 This season, Telvin Smith decided to take the season off. But, he is one of the most-promising players for the Jacksonville Jaguars, playing linebacker. Last season, Smith had an explosive rookie season, causing much stir, when he opted to take this season off.

Telvin Smith is now the center of a lot of controversy. Tonight, the NFL player came under much scrutiny, which has him as the major topic of discussion. The police were called to his home and now people are trying to figure out what’s going on.

Tonight, neighbors say the police arrived at Telvin Smith’s home, and he was placed in handcuffs. They also say that he was placed in the backseat of a police car. Whether or not he was actually arrested remains to be seen, but the Crime Scene Unit was seen leaving his home.

Watch the entire video and read the tweet below:

Multiple neighbors now telling me Telvin Smith was put into police car in handcuffs. His mother tells @WJXTScottJ she is aware of situation and is en route to Jacksonville. @wjxt4 pic.twitter.com/A8eizVz7ib

More in Hip Hop News
Boosie shoots his shot at Rihanna, saying he’s going to tell his kids she was his first, and then shares fantasy story of winning $1 billion lottery, buying a jet, and picking her up [PHOTO + VIDEO]
#blackhairchallenge dominates Twitter, as Black Women show how versatile their hair is, this holiday season