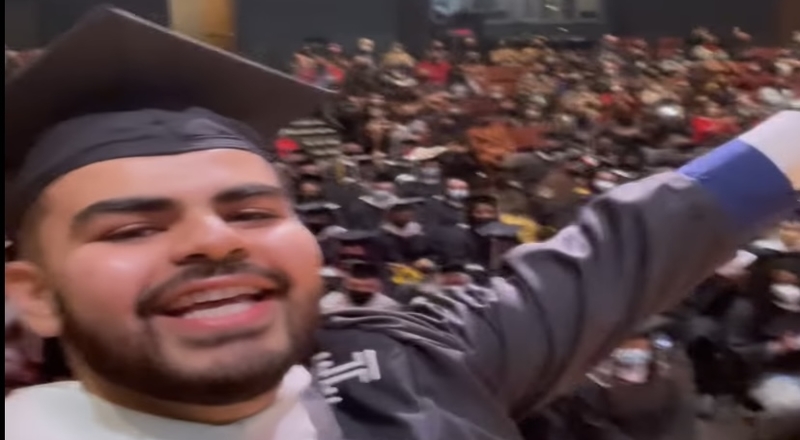 Back in 2019, a student at Temple University, in Philadelphia, went viral. This is Raheel Ahmad, as he ran into Lil Uzi Vert, at a local mall. At the time, he asked Uzi to pay his tuition, which was over $90,000. Uzi wanted proof that Ahmad was enrolled, and that he would have him covered.

A few days ago, Ahmad ended up graduating from Temple, with a degree in political science. He is now focusing on college tuition reform. Ahmad is launching GradOwls.com, to generate resources for gifting college tuition scholarships to at least two students per month. This is an NFT-based platform, for students. He is also asking Uzi to now pay for the tuition, which definitely has pending charges.

“@liluzivert I finally graduated bro, I told y’all I don’t bullsh*t. Can you now come thru 😅⁉️

“My 4 years at Temple University have come to an end! To all the fans/friends/family, and even fakes, I love you all 💙! The lesson college taught me is that once you become fearless, life is limitless. Be optimistic, have courage, be creative…YOU ARE the artist, so make the world your canvas 🌎 You may be wondering, “What is this BigHeel kid going to be doing next?” I’m announcing here that I’m starting a new chapter in life, trying to create change for students all around, and specifically those who have been in similar situations as myself.”

Ahmad also revealed that when he spoke to Uzi, it motivated him to “create change,” for himself. It also inspired him to help others.

“When Lil Uzi listened to my ask for help, it motivated me to try to create change beyond myself. Me helping others in a similar situation I’ve experienced, will be a great way to pay it forward, and change college students lives all around! Having graduated with a political science degree, my goal is to pursue policy change to address college tuition reform. My first step in that journey is to build a community (GradOwls.com) and generate resources for gifting college tuition scholarships to at least 2 students per month. Yup, the GradOwl NFT holders will have the ability to get their college tuition paid for!!”

Uzi has yet to respond to Ahmad yet, but hopefully, he comes through on his promise. Check out Ahmad celebrating becoming a college graduate, below.

More in Hip Hop News
DaBaby and NBA Youngboy will reportedly release joint album, “Better Than You,” on March 4
Blvck Krown ft. DJ E. Sudd – “There For Me” [VIDEO]