Home » Hip Hop News » The Lakers get roasted on Twitter for locker room celebration for their first win of the season, which brings their record to 1-5 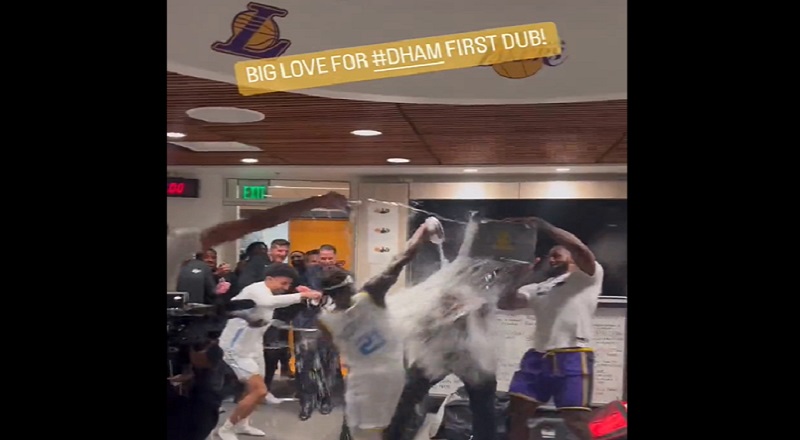 The Lakers get roasted for locker room celebration for first win

Two years ago, the Los Angeles Lakers completed the mission, and won their first championship in ten years. Led by LeBron James, the Lakers were on a mission from the start of the season. After missing the 2019 playoffs, in LeBron’s debut season, the Lakers traded for Anthony Davis. As a result, the Lakers rose to the top of the league. Since then, the Lakers have struggled mightily.

In the 2021 season, the Lakers got off to a 22-7 start. At the time, they were favorites to repeat as champions. However, an injury to Anthony Davis led to the Lakers falling out of contention. During the first part of the season, the Lakers were holding onto the second seed in the Western Conference. The Lakers fell into the play-in, where they would defeat the Golden State Warriors, and then lose to the Phoenix Suns in the first round of the playoffs.

The Lakers are currently living with their decisions of the 2021 offseason. Their trades shipped their young core off. As a result, the New Orleans Pelicans are playing well with Brandon Ingram leading the way. Also, Kyle Kuzma has fit in well with the Washington Wizards. In turn, the Lakers have struggled with Russell Westbrook. Last season, the Lakers fired their championship coach, Frank Vogel, after a 33-49 finish. The offseason brought Darvin Ham in as coach. Entering last night’s game, against the Nuggets, the Lakers were 0-5. They finally won and had an all out championship celebration. As a result, Twitter roasted them.

The Lakers get roasted for locker room celebration for first win

More in Hip Hop News
Diddy nearly gets into a fight with Michael Ferguson, aka 2Bit from “Power,” while dressed as The Joker [VIDEO]
Someone allegedly pulled a gun during Bronny James’ basketball game, leading James to say people won’t even let high schoolers hoop in peace