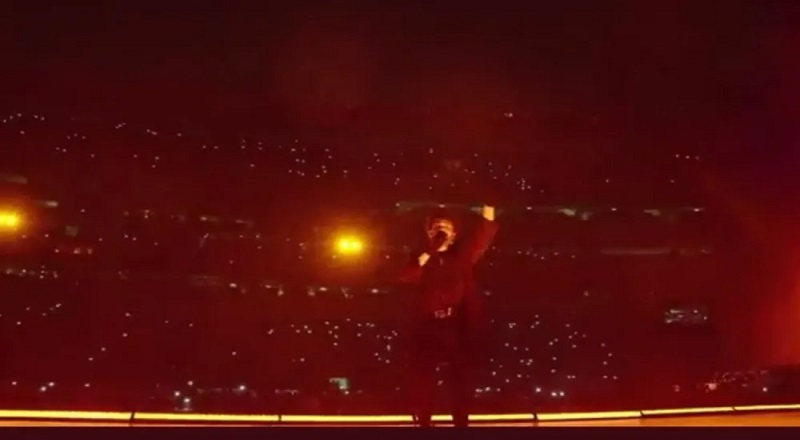 The Weeknd is giving motion picture movie experiences on his tour “After Hours Til Dawn.” Fans everywhere were losing their minds. The Weeknd posted an amazing clip, via Twitter, showing just how next level his concerts really are. The clip which has already gained 216,000 views within an hour of posting shows a packed out stadium. Fans took to Twitter begging the star for Europe dates to be released.

The Weeknd is fresh from the release of his fifth studio album Dawn FM which hit number one for the first time on Billboards top album sales chart. His album cover went viral, as The Weeknd rocked a full face of makeup on the cover. After Hours also gained international success, with the video, “Save Your Tears,” hitting 88 million views on YouTube.

The Weeknd kicked off the tour in Boston, with shows set for Las Vegas, Los Angeles and Chicago. The tour also features Snoh Aalegra, Kaytranada and Mike Dean as special guests. As he makes his way through the U.S, we have yet to see dates for Europe. Fans from all over took to Twitter expressing the need to see The Weekend overseas.

how do i make you love me? and make it last eternally? pic.twitter.com/dR0xwA2eWO

More in Hip Hop News
Trina loses her niece, as she was shot and killed in Miami at age 17; The girl was like a daughter to Trina
Danie Rose (@itsdanierose) comes forward as the woman dancing with Princeton Perez in viral dance video [VIDEO]