Home » Hip Hop News » Tim Duncan debuts as Spurs’ acting head coach, tonight, as fans say this may be a preview of things when Gregg Popovich retires; Twitter is upset Becky Hammon didn’t get the gig, since she’s been an assistant longer than Duncan 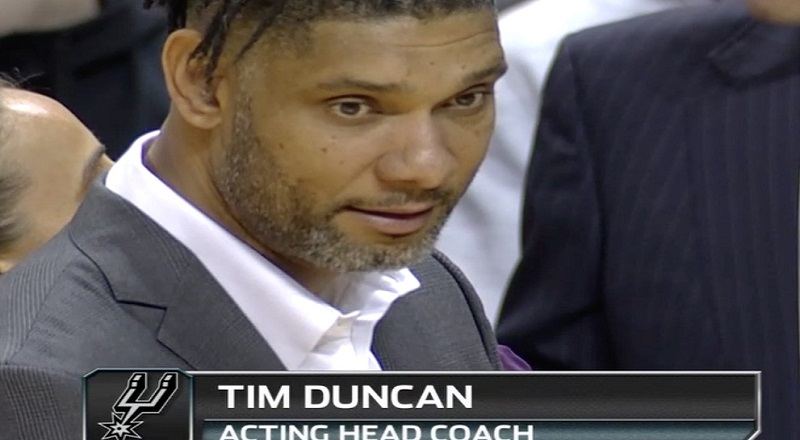 In 1997, the San Antonio Spurs, a normally-contending team, bottomed out for no reason. Their lone season in the cellar was a blessing in disguise, as Tim Duncan landed in their lap. Landing the 1997 top draft pick, Duncan and a healthy David Robinson immediately made noise.

Abruptly retiring, Tim Duncan faded from the spotlight, but did have some personal issues. With those resolved, he has become more of a presence, at Spurs games, recently hired as an assistant coach. In tonight’s game, he’s acting head coach, while Gregg Popovich is out, disappointing Becky Hammon fans.

On Twitter, fans are exciting, saying this may be the future of the Spurs, once Pop is out, for good.

Read the tweets about Tim Duncan below:

More in Hip Hop News
Beyoncé gets accused of fraud for filing Blue Ivy Carter trademark, with no intentions of using it, by Veronica Morales, a wedding planner, whose company is named Blue Ivy; Morales says Blue Ivy spelled backwards is “Lucifer’s daughter” in Latin, accusing Queen Bey of being Illuminati
London Taj’ier shares story on Facebook of befriending Maia Campbell, initially not knowing who she was, but later giving her chocolate on Valentine’s Day, offering her a place to stay, and donating her clothes, as Campbell works to restore her life