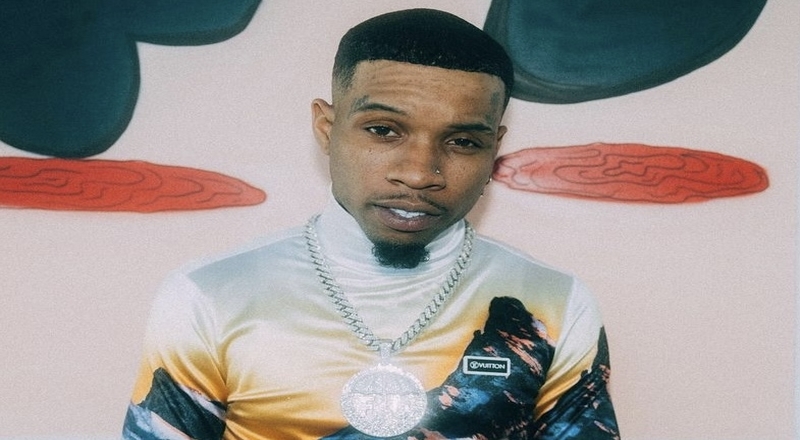 Last month, Tory Lanez went at it on social media, against Megan Thee Stallion and her boyfriend, Pardison Fontaine. Tory subliminally said that he had sex with both Megan, and her ex-best friend, Kelsey Nicole. Megan soon posted a screenshot of text messages, where Tory was apologizing for allegedly shooting her in July 2020. Megan added that lawyers have all call and text message records of Tory, and that the Toronto rapper was begging her and Kelsey on the phone, to not say anything.

Tory also clashed with Pardi on Twitter, due to Pardi telling him to put the phone down and confront him. Tory went on to say that he saw Pardi before, and nothing went down. Now, it appears that Tory is calling out Pardi and Megan again, in a new song he just released, titled “Cap.”

Some notable bars from Tory which appear to be aimed at Pardi and Megan are the chorus, where he says the beef is “Cap.” Tory also rapped “Ken just got them two best friends to f*ck, I said, ‘Goals,’ which appears to hint at having sex with Megan and Kelsey.

Tory then brought the bars against Pardi, as he said:

“He a bird, he probably in the ex four/Plus the only party that we know is next door. You got a Goyard on your birthday ’cause that n***a broke. He would say something back but he need Cardi B for that.”

Tory’s pretrial hearing in his Megan 2020 shooting case, also got postponed last month. Back in November 2020, he also plead not guilty to felony assault. If convicted, he faces 22 years and eight months in prison.

More in Hip Hop News
Fivio Foreign says Jay Z was supposed to be on “City Of Gods,” but Kanye West was too impatient to get Jay’s verse [VIDEO]
Young M.A will headline first tour date for 2kpoolparty in Miami, for Spring Break