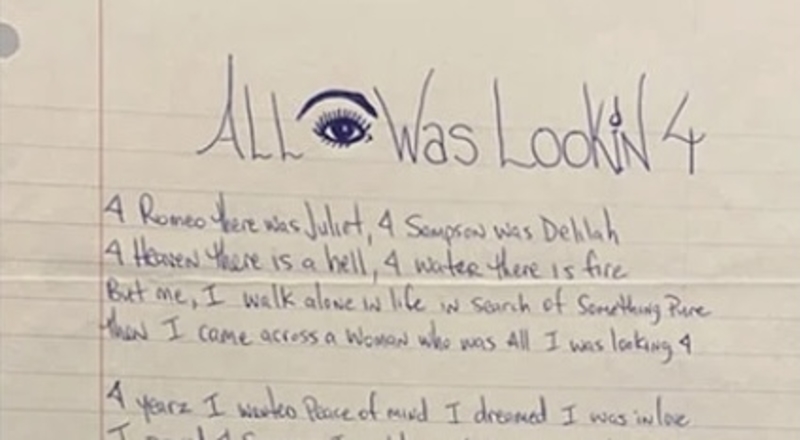 Tupac Shakur poem to ex-girlfriend for sale at $95000

2Pac is still regarded as one of the greatest rappers of all-time. Any form of Pac memorabilia is also very popular on auction markets, and now, another trending one is up for grabs.

Moments In Time is putting up a poem that 2Pac wrote to one of his ex-girlfriends, for auction. This is to a woman he had been seeing back in the day, named Simi.

This poem is also said to have inspired Pac’s classic 1996 “All Eyez On Me” single, featuring the late Big Syke. The poem is titled “All Eye Was Lookin’ 4.” Currently, it is being sold for a whopping $95,000. This poem was initially written on August 26, 1995.

The “All Eyez On Me” single went on to appear on 2Pac’s fourth studio album, All Eyez On Me. That project was released on February 13, 1996. This album was the last that 2Pac would release alive, as he was shot and killed in Las Vegas in September of that year.

The All Eyez On Me album debuted at number one on the Billboard 200 chart, and is currently certified diamond in the US. It was led by hit singles such as “California Love” remix, with Dr. Dre and Roger Troutman and “I Ain’t Mad Atcha” featuring Danny Boy.

Tupac Shakur poem to ex-girlfriend for sale at $95000