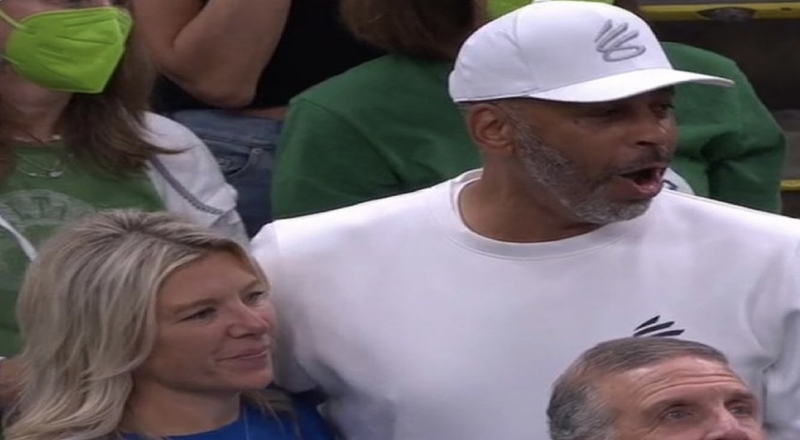 On Friday Night, the Golden State Warriors bounced back and defeated the Boston Celtics in Game 4, of the NBA Finals. This went down in Boston, as Stephen Curry had a huge fourth quarter. Curry totaled 43 points, 10 rebounds and four assists, as the Warriors won, 107-97.

Curry’s father, Dell, was also in attendance, in Boston. When the ABC camera panned to him in the crowd, a woman was with him, as well. This was an older white woman, who was wearing a blue Warriors shirt.

Last August, Dell Curry and his wife, Sonya, officially split up. That was after 33 years of marriage. Steph’s mother was a fan-favorite on social media, due to her looks. For Dell Curry’s new girlfriend, the reviews have been mixed on social media, as many don’t feel that she lives up to the looks that Sonya did.

Game 5 of the NBA Finals will be held on Monday, in San Francisco. The Warriors have only lost one game at home, in these playoffs. That came vs the Celtics in Game 1 of these Finals, after having a comfortable third quarter lead.

Check out Twitter reactions to Dell Curry’s new girlfriend being with him at the NBA Finals, below.

More in Hip Hop News
Blueface to box against Nick Young, in Los Angeles, on July 30, at Crypto.com Arena
Fulton County D.A. Fani Willis says she has security around her now, as she’s been getting threats online, since YSL indictment [VIDEO]