Home » Hip Hop News » Tyler Perry gets dragged, on Twitter, for awful fight scene, on one of his shows, where a man spins and falls, after being punched [VIDEO] 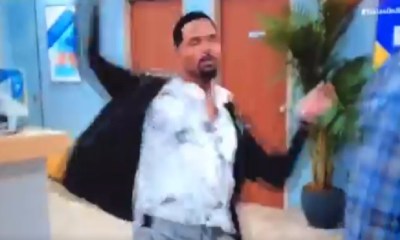 Often, Tyler Perry is coming under fire, for the content in his shows. At the end of 2019, Tyler Perry concluded his business with OWN, moving over to BET. One of his BET shows is facing criticism, over a fight scene, where a man took a dramatic spin, before falling, after being punched.

Tyler Perry, over the past twenty-five years, has built a production empire. Beginning with stage plays, Perry partnered with Lionsgate. After making history with them, he moved onto Paramount Pictures, where he now has a first-look deal with them.

While Tyler Perry has reached billionaire status, fans are not feeling his latest TV show episode. Last night, one of his BET shows aired a fight scene, where the man in the photo, above, was punched in the face. Twitter is upset because of how dramatically he was spinning, while falling to the ground.

Read the tweets about the fight scene below: