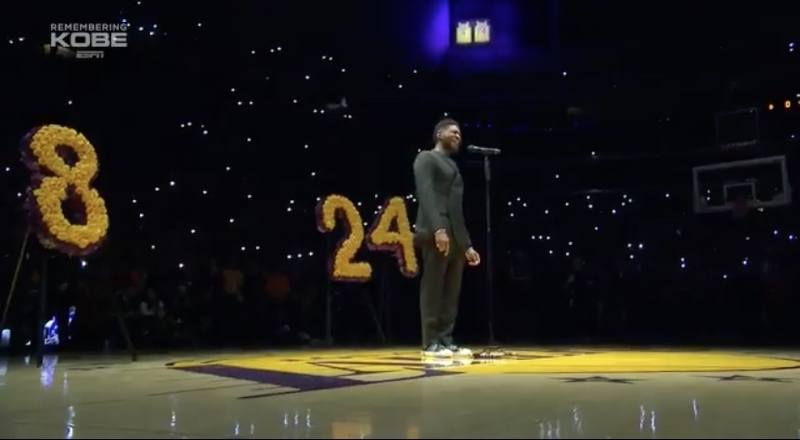 Tonight is officially the first game that the Los Angeles Lakers are playing at home at the STAPLES Center since Kobe Bryant, his daughter Gianna, and seven others passed away in a helicopter crash in Calabasas, CA. Tuesday’s game vs the Clippers was postponed. The Lakers honored the legend who played all 20 of his NBA seasons with them prior to their matchup vs the Portland Trail Blazers along with Gianna and the other victims.

The Lakers gave out 20,000 Kobe shirts to fans at STAPLES and Usher soon sung “Amazing Grace” on the court. He did a phenomenal job as fans from around the world reminisced on the greatness of Kobe as a player and as a person. Expect the Lakers to be extremely motivated tonight to get the win to honor their brother. It’s a hard time for everyone in the city of Los Angeles but everyone continues to honor Kobe and Gianna in amazing ways.

It was amazing for fans to get to witness Kobe play as well. He was the closest thing to Michael Jordan in our generation. Five NBA championships, 18x All-Star appearances, 11x All-NBA First Team, 9x All-NBA Defensive First Team, 2x NBA Finals MVP, and a 2008 NBA MVP. Check out Usher performing “Amazing Grace” in honor of Kobe Bryant below.

More in Articles
“See You Again” (Kobe Bryant tribute) #KobeTribute | Trail Blazers vs. Lakers [VIDEO]
Seeing LeBron James tear up, at the #KobeTribute, has Twitter fighting back their own crying tears, as they still mourn Kobe Bryant [VIDEO]