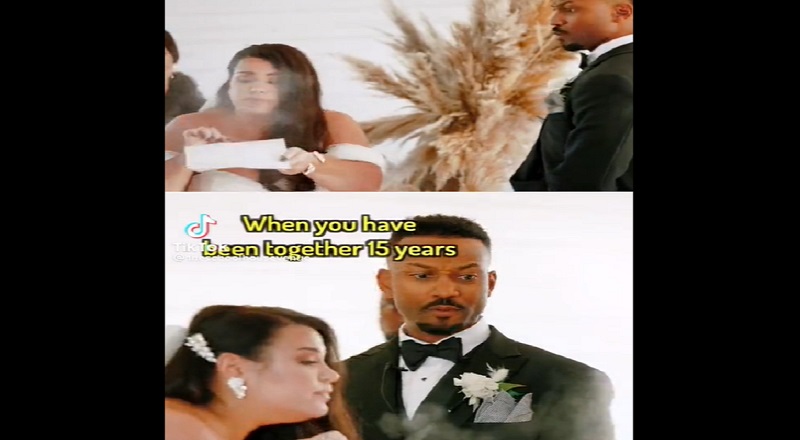 Woman blows dust off vows after marrying boyfriend of 15 years

Relationships and relationship goals dominate every social media platform. Rightfully, there are women out here that are no longer settling for being girlfriends. Instead, women are demanding their boyfriends marry them. If not, they are leaving their men. Well, at the very least, the women are threatening to leave their men if they can’t get a ring.

Over the years, there has been an increasing narrative that marriage is only a piece of paper. With that being said, there are people who say that love is the only thing that counts. On the other hand, there are those who are arguing if marriage is only a piece of paper, it should not mean too much to go ahead and get that done. After fifteen years, one woman got her man to marry her.

When the woman in the below video got married, she decided to have some fun with it. According to the video, she and her boyfriend have been together for fifteen years. After all of this time, they decided to get married and have a wedding. While the woman was happy to be getting married, she still brought a prop for the occasion. As she went to pull her written vows out, she had prop dust on them. As a result, she blew it off before reading her vows. Meanwhile, the look on her now-husband’s face was priceless.

Woman blows dust off vows after marrying boyfriend of 15 years

This couple finally got married after 15 years and look what the bride did at the alter 🤣 pic.twitter.com/GkX3HRo3ms