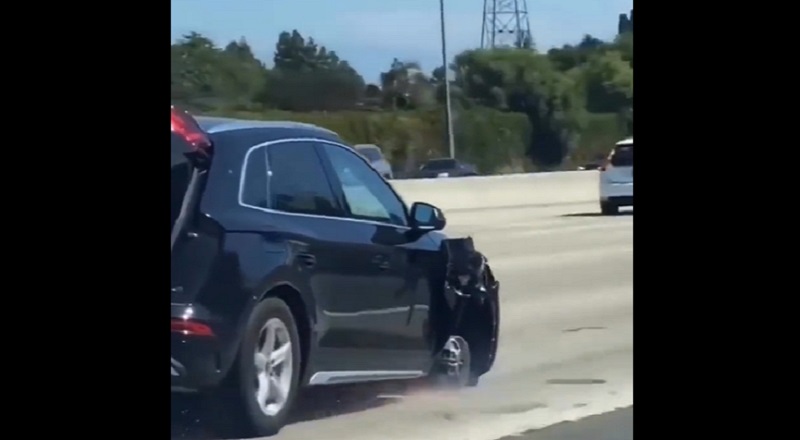 The things people do on the highway are downright scary. Honestly, there are no other words for it. But, this video raises more questions than anything else. Clearly, this vehicle is not drivable. Despite this, the video is being driven down the freeway, speeding at that. First, the question is where law enforcement is. After that, the questions are how and why the vehicle is even on the road.

Road rage has become more common, over the past decade. Make no mistake, road rage has always been prevalent. However, there are an increasing number of fatalities, due to people getting angry while driving. Driving has become increasingly dangerous. Aside from road rage, there are people taking unnecessary risks with their lives. However, in the case of this woman, there was a person behind her to film it.

A man was driving down the freeway and he noticed her driving on three wheels. Not only was the woman driving on three wheels, but the missing wheel was her front right wheel. So, her steering had to be impacted. There was so much going on with this situation. First of all, the car was clearly damaged. Second, the man who spotted her sounds like a mix of a reporter and a cop. Third, the man actually tailed her, and made her get out of the car. While all of this is a lot, the man did the right thing by getting her off the highway.

Just a casual cruise on the highway. Apparently the woman driving was on drugs as well. pic.twitter.com/AS3PHuBUWo

More in Hip Hop News
Yung Miami claims that people are mad that her “Caresha Please” podcast was named Best Hip-Hop Platform, at #HipHopAwards
Bruno Mars extends his record for most RIAA diamond-certified songs, with six, with “Locked Out Of Heaven”