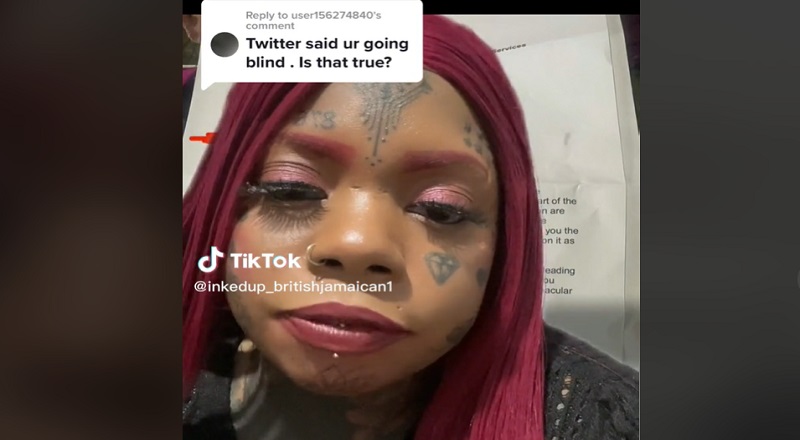 Woman tattoos her eyeballs and now is going blind

Ayana Peterson is the woman in question. For all intents and purposes, she is an intelligent woman. Not only is she the mother of five children, she is in law school. In addition, she is thirty two-years-old. None of this stopped Peterson from making a very questionable mistake. This woman decided to tattoo her actual eyeballs, altering the colors to purple and blue, respectively. She did this because she was impressed by Amber Luke, an Australian model.

Recently, Ayana Peterson began going viral on TikTok. There are several videos of her, alongside her daughter, showing off her eyeballs. As previously mentioned, Peterson made the decision to change the color of her eyeballs. Now, as most would expect, she is dealing with a lot of trouble. At times, her eyes are puffy, and almost swollen shut. As a result, Peterson is taking all kinds of remedies in order to ease the swelling and the pain.

Ayana Peterson only got the eyeball tattoo, due to Amber Luke. When Luke had her procedure done, she experienced temporary blindness. As a result, Peterson assumed she would only have temporary blindness. However, according to reports, she could be permanently blind. For what it’s worth, her daughter told her doing this would be a bad idea. Minutes ago, Peterson spoke out, and she said she is not 100% facing permanent blindness, but she could.

Woman tattoos her eyeballs and now is going blind

More in Hip Hop News
Keke Palmer says she’s beautiful in real life because of who she is and not what she looks like, after people said she’s ugly without makeup
Future purchases $7.5 million Miami area apartment, at Bentley Residences building, which doesn’t open until 2027