Home » On the Rise » Jiggz talks Miami upbringing, having music featured on “The Chi,” along with other shows, his “Jiggyworld” project, and more | HHV On The Rise 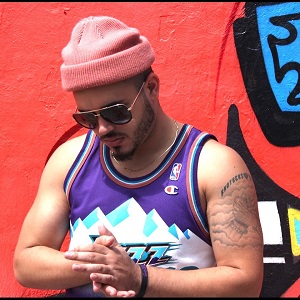 Miami’s hip hop scene has a history that dates back to the 1970s. In the 1980s, Miami was the second city, in the South, to rise. Many of hip hop’s biggest names hail from the city.

Jiggz is working to become one of those next big names. A lot of people are already familiar with his work, whether they know it or not. The rising talent has had his music placed on such shows as “Daredevil” and “The Chi.”

One of the hardest-working independent artists in the game, Jiggz returns with his Jiggyworld project on April 9. Ahead of the release, Jiggz spoke to Hip-HopVibe.com, for an On The Rise interview. The buzzing rapper spoke about his rising career, his upcoming project, and much more.

What inspired your artist name? And where did you get the name from? People would always tells me I’m Jiggy with rap flow and dance moves, so I came up with Jiggz.

Where are you from (born and raised)? And where did you grow up? Born and raised in Miami, Florida. But my parents are Cuban/ Dominican. So I’m repping Latinos.

Where do you currently live? Miami, Florida. Little Havana.

How would you describe your sound/style? I have a versatile sound and can make it many styles. But. I strive to make smooth and swaggy sounding music. Music that is relatable and easy to listen to.

Do you also write, produce, and/or engineer your own music? I write my own music, but now I freestyle most of it, because it brings out a different feeling. Ray Ali is my producer and engineer.

Do you dance/choreograph? I do dance, but not choreography.

Do you have any other special talents, such as acting, etc.? I was a talented athlete. Had scholarships for football. Dancing is also a talent of mine.

When did you record your first record? I recorded my first record in 2013 and they were freestyles over YouTube beats.

Why music? Describe your passion. Music is the way I express myself. It’s the only way I let out my emotions, because I tend to bottle things up, unless I’m in front of a mic. It also was the perfect alternative to sports due to not being able to play football anymore. So I also have a competitive nature in music as well and strive to always be a better version of myself as an artist.

Who/what inspires your sound/music? My main inspiration is my parents. they showed me timeless music since a kid which made me fall in love with the feeling music gave me. I look up to many artists that inspired my sound such as Lil Wayne, Drake, Kanye, 50 Cent, Young Thug.

Who is your motivation and why? My parents, my brother, and haters.

What are your goals when it comes to your music career? To have a long lasting career through the impact I make. I want to inspire everyone to follow dreams.

In your opinion, what makes you stand out from other/current artists out there? Most definitely, my delivery and my authenticity. There is no one in the industry that sounds like me. I have a smooth voice that can change up depending on the track. I’m also bilingual and throw some Spanish in there. I don’t approach any beat the same. My rhythm matches the beats I hop on.

What are you most known for? What got you noticed? I’m a strong representation for Miami and my work ethic. I got most known for my quality music & release parties as well as my shows.

Have you performed and/or participated in any talent shows and/or television shows? I have done many shows locally. I’ve toured across the states to open up for Broward county artist Johnny OZ. I also have 4 show/TV placements. I have songs on the following shows: “Daredevil,” “The Chi,” “The Grand Army,” and a short film called Holler.

Do you have a new project that is out now or coming out soon that you are currently promoting? My solo project, which is dropping on April 9th, called Jiggyworld, and my collaboration EP with Zy official called Take One Vol. 1.